Bridge to the future

On 23 October, Chinese President Xi Jinping ushered in a new era of regional integration with the opening of the Hong Kong–Zhuhai–Macao Bridge (HZMB). After nine years of construction, this first‐ever land link between Hong Kong and the west bank of the Pearl River Delta has become the world’s longest sea‐crossing bridge – and it’s most expensive bridge period, estimated at more than RMB120 billion (US$17 billion).

President Xi was guest of honour at the opening ceremony, accompanied by Vice Premier Han Zheng as well as Chief Executives Chui Sai On of Macao and Carrie Lam of Hong Kong.

Chairman of the National Development and Reform Commission He Lifeng chaired the ceremony, which welcomed more than 800 guests, including several prominent members of the relevant governments, to mark the achievement. Macao sent a 140‐member delegation, including principal officials of the Macao government and community members, for the event.

“It shows China’s hardworking spirit, ability to innovate, and ambition to realise world‐class achievements … Its completion has proven that Socialism is achieved through hard work, as is the new era. It should not only be of high quality but also be maintained well, fulfilling its function and role in building the Guangdong–Hong Kong–Macao Greater Bay Area.”

Chief Executive Chui echoed the positive outlook on future integration and economic progress: “The close communication between the three governments in building the bridge demonstrates the successful implementation of the ‘one country, two systems’ principle. It will have profound significance in driving economic development of the region. It will also improve opportunities for Macao people to have exchanges with people on the mainland.”

Chui also spoke to the efforts made to streamline the movement of people and goods between the different regions: “Customs clearance work between Macao and Zhuhai will be carried out on a ‘Joint Inspection and One‐time Release’ principle. The innovative form of boundary clearance is in order to make the process efficient for travellers using the Hong Kong– Zhuhai–Macao Bridge.”

He believes that the bridge will facilitate Macao’s contributions toward the Greater Bay Area (GBA) and the Belt and Road Initiative.

After the opening ceremony, President Xi, Vice Premier Han, Chief Executives Chui and Lam toured the bridge with other guests. One guest, Macao Chamber of Commerce Chairman Ma Iao Lai, noted that the more convenient link between Hong Kong and Zhuhai will help Macao’s small and medium-sized enterprises break the shackles of a limited local market and open up a broad market in the GBA.

The bridge opened to traffic the following day at 9 am.

The bridge, together with the new high‐speed train linking Hong Kong and Guangzhou, was designed to strengthen the physical and economic ties binding the two SARs to mainland China.

The two transportation links are key elements of the GBA, a national strategy set to play out over the next 20 years, transforming Macao, Hong Kong, and nine cities in Guangdong province into a cohesive economic powerhouse.

The nine mainland cities – Guangzhou, Shenzhen, Zhuhai, Foshan, Jiangmen, Zhaoqing, Huizhou, Dongguan, and Zhongshan – already account for 85 per cent of the economy of Guangdong province, itself the most prosperous in China. By integrating these cities with Hong Kong and Macao, the Chinese central government aims to create the world’s biggest bay area in terms of economic scale, as well as a world‐class centre for innovation and creativity.

According to estimates by China Centre for International Economic Exchanges, by 2030, it will reach that goal with a GDP of US$4.62 trillion, exceeding those of Greater Tokyo and Greater New York.

The new transportation links will effectively bring all 11 cities within a one‐hour travel radius of one another, neatly complementing the existing logistics network. The GBA boasts multiple high‐traffic international airports and three of the world’s ten busiest container ports. It’s also home to two major financial centres, Hong Kong and Shenzhen, each with their own stock market.

Beijing wants to create within the GBA a single market for finance, manufacturing, and technology. The new bridge will accelerate the movement of people and goods within the GBA, and enable greater freedom of movement for residents of Macao and Hong Kong to live and work in the mainland.

A triumph of design

For all it will simplify travel and relations in the future. Building the world’s longest bridge‐cum‐tunnel sea‐crossing proved a complicated and time‐consuming process. One major issue was the location: the bridge is situated in the flight path of Hong Kong International Airport and crosses one of the busiest cargo waterways in the world, with more than 4,000 vessels passing through each day.

Now complete, the 55‐km dual three‐lane carriage way snakes across the Pearl River Delta before dipping more than 40 metres below the waves to accommodate boat traffic. Two artificial islands serve as landing points for either end of the 6.7‐km tunnel section, each one measuring 100,000 sq metres and equipped with its own facilities. Traffic control and surveillance systems monitor the flow of vehicles, while heart monitors and ‘yawn cams’ will alert the bridge’s control centre to potentially vulnerable drivers.

The cost of the megastructure is being shared between the Guangdong provincial government (44 per cent), the Hong Kong government (43 per cent), and the Macao government (13 per cent). These contributions account for less than half of the total, with the remainder being sourced through bank loans.

Roughly 50,000 construction workers and engineers, both Chinese and foreign, worked on the project.

Built to last 120 years, chief designer Meng Fanchao took into account factors such as accidental ship strikes, magnitude‐8 earthquakes, and a perennial threat to the region: typhoons. “It can cope with typhoons with winds of more than 360 kph,” he said. Typhoon Mangkhut, which hit Macao and Hong Kong in September, reached wind speeds of up to 250 kph, well below the structure’s threshold.

The bridge will facilitate Macao’s contributions toward the Greater Bay Area and the Belt and Road Initiative.

Border crossing facilities flank the bridge, one on the east bank for Hong Kong and one on the west bank shared by Macao and Zhuhai, with services for passengers and vehicles open 24 hours a day.

Set on an area of 71.6 hectares, the Macao border crossing facility includes two public car parks with a combined capacity for 6,089 private vehicles and 2,054 motorcycles.

Under the new inspection system, travellers will be required to pass border controls only once – via either the automatic, semi‐automatic, or manned channels depending on the identification documents – to complete the departure and arrival formalities.

The biggest impact of the bridge will be to accelerate the integration of Hong Kong and the western Pearl River Delta.

Commercial freight and public bus services are expected to make up the bulk of bridge traffic. The bridge bus service from all three checkpoints runs 24/7, offering highly competitive prices and convenience for those looking to cross the delta. Fares range from MOP65 (US$8.05) during the day to MOP70 (US$8.67) at night, with reduced prices for both children (MOP33; US$4.09) and seniors (MOP35; US$4.33). Shuttle services from locations within Macao come with a higher price tag: HK$160 (US$20.40) between Prince Edward in Hong Kong and the Galaxy Hotel in Macao, or HK$170 (US$21.67) between Kwun Tong in Hong Kong and Sands in Macao. While comparable in price to the ferry services, which run between HK$171 (US$21.80) during the day and HK$211 (US$26.90) at night, the shuttles take 40–50 minutes longer than the one‐hour ferry ride.

Authorities expect the bridge to see 50,000 bus trips per day. Local taxis will not be allowed on the bridge.

New cross‐border permits for private vehicles are currently capped at 5,000, with an additional 3,000 becoming available in three months. The bridge will also be accessible to the nearly 28,000 vehicles in Hong Kong and 3,000 in the mainland that currently possess cross‐border licences. 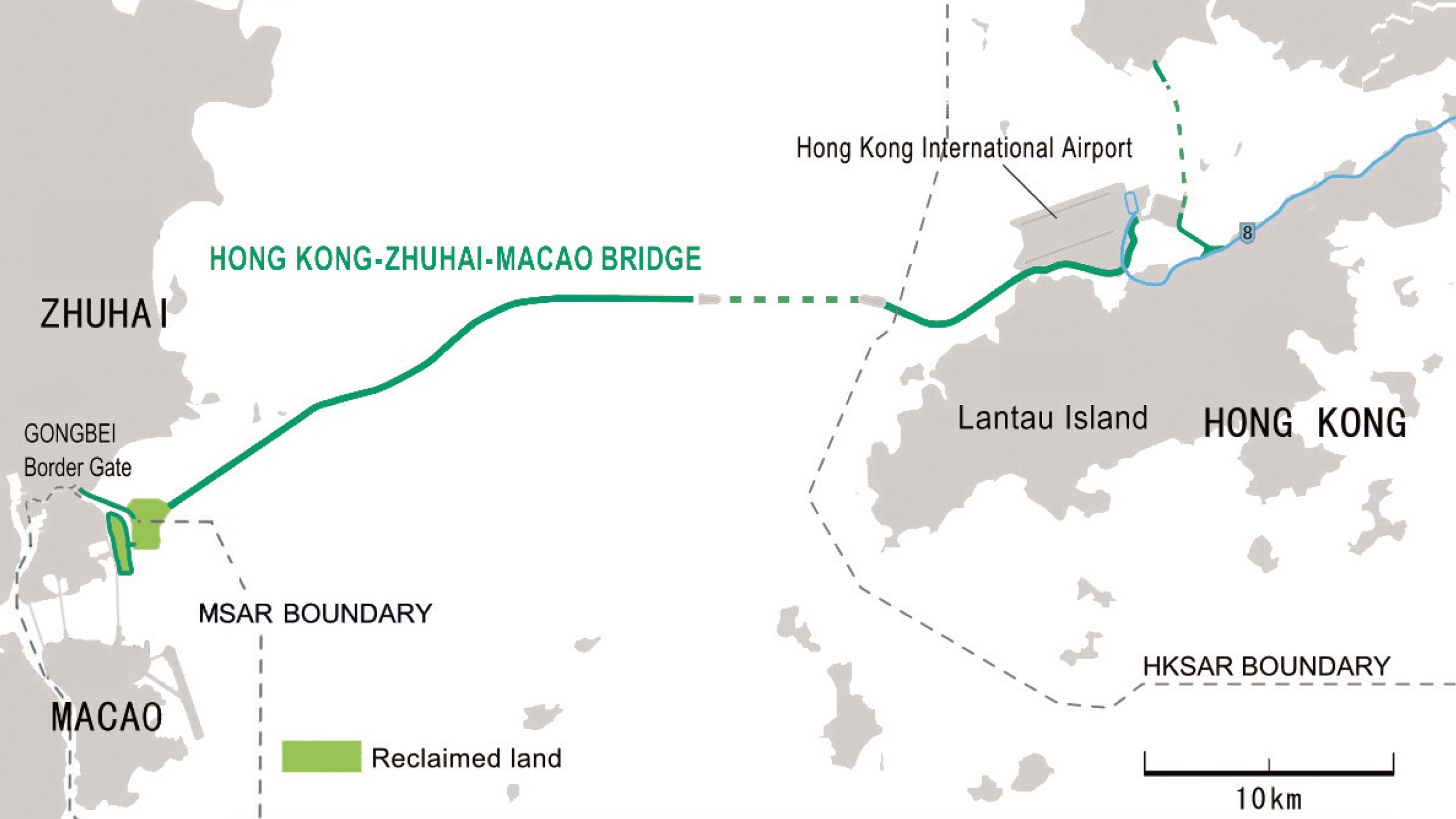 The biggest impact of the bridge will be to accelerate the integration of Hong Kong and the western Pearl River Delta (PRD). Hong Kong and foreign companies have long concentrated investment in cities along the rail and road corridor
to Guangzhou, turning it into the “factory of the world.” The HZMB creates for the first time a rapid road connection between this
area of the PRD and Hong Kong’s international airport (HKIA)
and seaport. This will increase
the volume of goods and people between the airport and Macao and cities on the western PRD.

In 2017, HKIA handled 4.94 million tonnes of air cargo, making it first in the world for cargo for the eighth consecutive year. Of its cargo, high‐value items that must be shipped quickly account for less than 10 per cent by volume but 40 per cent by value. The main items are fresh food, flowers, fashion, electronic goods, and pharmaceuticals.

Producers of these goods in the western PRD, Hainan, Guangxi, and other areas of the southwest will be able to ship such items more quickly to the HKIA. The bridge promises to cut the current travel time between Zhuhai and the HKIA from about four hours to 45 minutes. Such a drastic decrease in travel time will encourage companies to locate manufacturing in these areas.

Then there is passenger traffic: HKIA handled 72.9 million passengers in 2017, up 3.3 per cent from the previous year, maintaining its position among the top 10 in the world. It connects to more than 220 destinations, including 50 in the mainland, and handles more international passengers than the top five airports in the mainland combined.

Macao expects to see its tourism industry benefit the most from the new bridge. Visitors from Hong Kong and mainland China account for more than 80 per cent of the visitors to Macao; many travel to the city via Hong Kong. The bridge offers them a more affordable alternative to the current ferry services.

The 24‐hour shuttle bus services between the three cities will run every 5 minutes during peak hour, 10–15 minutes during non‐peak period and every 15–30 minutes overnight.

This increased accessibility complements the ambitious goal set out by the Macao Government Tourism Office of 40 million visitors by 2025. More visitors means more customers for the city’s hotels, casinos, restaurants, and shopping malls.