Chief Executive Ho Iat Seng pledged to intensify Macao’s efforts to revive its economy during his Policy Address for the Fiscal Year 2021. He also said that the protection of residents’ lives and health remains a ‘top priority’.

Macao’s Chief Executive stressed that the ‘protection of residents’ lives and health’ continues to be his government’s top priority during his Policy Address for the Fiscal Year 2021. Ho Iat Seng also pledged to speed up the city’s economic recovery in the wake of COVID-19 during the address on 16 November inside the hemicycle of the Legislative Assembly (AL).

Titled ‘Strengthening the Foundation for Consolidation, Tackling Challenges Head On’, this was Ho’s second policy address at the AL since he took office on 20 December last year. In it, he also acknowledged that 2020 has turned out to be an ‘unprecedented and severe test for everyone’ and that due to the novel coronavirus crisis, Macao is going through a ‘grave recession’ where the receipts of the tourism and gaming sectors have ‘fallen steeply’ while other sectors have also been deeply impacted.

“Small, medium-sized and big enterprises have all been confronted with different kinds of difficulties and challenges,” said the Chief Executive, adding that the government’s receipts have ‘drastically fallen’ and residents have been facing immense pressure as far as their jobs and lives are concerned. “The GDP is expected to shrink by 60.9 per cent in real terms in 2020,” he continued, forecasting an even deeper drop than the International Monetary Fund (IMF) did in mid-October when the international organisation predicted Macao’s GDP to decline by 52.3 per cent in 2020 compared to the previous year.

At the address, Ho also said that Macao’s accomplishments in the fight against COVID-19 ‘have not come easily’. Macao has been described by observers as one of the safest places on Earth as far as the pandemic is concerned, with only 46 COVID-19 cases – 44 of which were imported – being recorded in the first quarter of this year. All of those people have since recovered.

On the anti-COVID-19 front, Ho said that prevention of a rebound of the epidemic in Macao continues to be his government’s priority in tackling the highly infectious disease. He also said that the government would further strengthen regional joint prevention and control efforts, expedite vaccine supplies and prepare for the setting-up of a mobile hospital. The Chief Executive underlined the Macao government’s continued need to impose an entry ban on foreigners so as to protect the city from COVID-19 risk, pointing out that other countries and regions all over the world have also been implementing similar entry bans.

Economic recovery is a priority

On the economic front, Ho said the Macao government would actively participate in the central government’s dual circulation strategy that stresses both domestic and external factors in fostering the nation’s economic growth. He also said that the government would further increase the number of public infrastructure investment projects, such as the construction of a fourth bridge between Taipa and the peninsula.

Ho underlined the importance of ensuring the local economy’s ‘adequate economic diversification’ such as by speeding up the development of a modern financial services industry, the establishment of a bond market, further growth in the traditional Chinese medicine (TCM) industry and promotion of Macao as a safe tourist destination, based on the concept of ‘smart tourism’ – in short, where a destination facilitates access to tourism and hospitality products, services, spaces and experiences through technological tools – and tourism service excellence. Ho also said that the government’s economic diversification drive does not mean that it will have to deliberately undermine its pillar industry – the gaming sector.

The Chief Executive promised that the government’s austerity measures won’t impact its expenditure on social welfare measures, such as the continuation of its annual ‘wealth-sharing’ handout of MOP 10,000 (US$1,250) for permanent and MOP 6,000 (US$750) for non-permanent residents. The way the government will give residents its annual ‘wealth-sharing’ handout next year will depend on their views and the development of the pandemic but he reaffirmed that the government would continue sharing the city’s wealth with residents in cash if ‘everybody’ prefers it that way.

During the address, Ho stressed the urgent need to deepen the reform effort and said that his government would accelerate the development of digital governance. The Chief Executive added that patriotic and national security education needed to be further strengthened and announced steps to improve Macao’s national security laws and regulations, as well as the enactment of specific legislation to protect the SAR’s official secrets.

Ho also underlined the ‘strong support’ that the central government has been providing to the city, adding that Macao has ‘profoundly learnt from and followed the spirit of the important speeches delivered by President Xi Jinping during his visit to Macao in December last year’. “We must take efficient measures to prevent the infiltration and intervention by external forces,” said Ho, who also underlined his government’s determination to fight corruption.

Following the address, Ho Iat Seng spoke at a special press conference which was held at the Government Headquarters. Here, the Chief Executive underlined that the government’s consumption subsidy scheme has helped boost the local economy and stabilise employment. The first phase of the scheme, which included an MOP 3,000 (US$375) consumption smartcard, ran between May and July. The ongoing second phase of the scheme, including an MOP 5,000 (US$626) top-up to the card, is running between August and next month.

Ho said that the consumption subsidy scheme has ‘obviously’ stimulated consumer spending since its launch in May, adding that 75 per cent of the subsidy has been spent in the ‘cha chaan teng’ – those traditional Hong Kong and Macao-style cafés dotted across the city – sector in particular. When asked about whether the government will roll out a third round of financial support measures for residents and businesses alike, Ho said that it would ‘really’ depend on the development of the pandemic. “If the COVID-19 pandemic stabilises – or COVID-19 vaccines become widely available,” he said, “Macao would be able to welcome tourists from many areas around the world and its economy would improve, in which case the government would not have to roll out the third round of financial support measures.”

“[But] if local SMEs still have difficulties in running their business next year due to the still serious COVID-19 pandemic,” the Chief Executive continued, “the government would not rule out implementing financial support measures that accurately benefit those in need.”

At the press conference, Ho Iat Seng was asked by reporters about the government’s ongoing preparations for its bidding process for the granting of future gaming concessions in the run-up to the expiration of the city’s three gaming concessions and three sub-concessions in 2022. Ho had already stated in his policy address that the government would propose amendments to the city’s current gaming industry law next year. Ho said, at the policy address, that the government will hold a public consultation first before drafting amendments to the gaming law.

Ho pointed out that according to the full version of the 2021 Policy Address, the government plans to submit a bill amending the gaming industry law to the legislature for debate and vote in the fourth quarter of next year, but whether the schedule could be achieved would depend on the outcome of a public consultation which will be held next year. He underlined that the government still has time to prepare for the future gaming concession bidding process, which he described as a ‘complicated’ matter as there are still about two years left before the expiration of the current gaming concessions and sub-concessions in 2022.

Hope for a vaccine

The Chief Executive said at the press conference that only after COVID-19 vaccines are available can Macao’s economy and employment situation improve. Ho admitted that, therefore, at least for the time being, it was difficult to tackle Macao’s unemployment issue, which could only be solved by an economic recovery. The unemployment rate reached 4.1 per cent in the July-September period and the underemployment rate – which counts those workers that are part of the city’s labour force and actively seeking work but currently without any climbed to 4.7 per cent.

Pointing out that certain COVID-19 vaccines are now widely expected to become available in the near future, Ho said that after all of Macao’s residents get vaccinated against the coronavirus, the government would lift its current entry ban on foreigners who then wouldn’t even need to be tested for the virus before entering the city. Ho said that the availability of COVID-19 vaccines was a ‘key factor’ that would change Macao’s current ‘bad’ economy and employment situation. “After [Macao residents] get their COVID-19 vaccination and develop antibodies,” he said, “the government will dare to reopen [Macao’s tourism] market [to the world].” The Chief Executive added that ‘if all the people’ in Macao get a vaccination, the situation, in terms of the economy and employment, ‘will change, as we won’t need to be scared of tourists who may have been infected with the disease’.

After Macao residents get their COVID-19 vaccination and develop antibodies, the government will dare to reopen Macao’s tourism market to the world.

Ho also underlined that Macao’s government will strive to purchase a sufficient number of COVID-19 vaccine doses so as to cover the city’s whole population that stood at 682,800 at the end of the third quarter. The Health Bureau (SSM) has said that the local government aims to purchase 1.4 million vaccine doses, which would ensure two shots for every single person in the city.

Not long for Hong Kong?

At the press conference, the Chief Executive pointed out that according to its standards, the central government would only classify Hong Kong as a COVID-19 low-risk area if no new local cases have been confirmed for 14 consecutive days. He said that only if Hong Kong achieves this situation could Macao lift its 14-day quarantine for arrivals from the neighbouring SAR.

Ho said that the Macao government surely wants Hong Kong visitors but Macao still couldn’t offer them quarantine-free entry due to the fact that its COVID-19 epidemic situation has not yet stabilised. He said he hoped that the Hong Kong government could bring the number of new local cases to zero under its recently rolled out COVID-19 control measures so that the movement of people between the two cities could resume as normal.

Ho also said he hoped that Hong Kong residents who have completed their 14-day quarantine on the mainland will choose to visit Macao for a while before returning to their home SAR, which would be ‘a good thing’ for Macao. “We welcome them to come to Macao to travel around the city and eat something here before returning to Hong Kong,” said the Chief Executive. Last year, Hongkongers accounted for 18.6 per cent of Macao’s 39.4 million visitor arrivals. According to official data, Macao recorded 4.02 million visitor arrivals in the first nine months of this year, a year-on-year decline of 86.7 per cent. 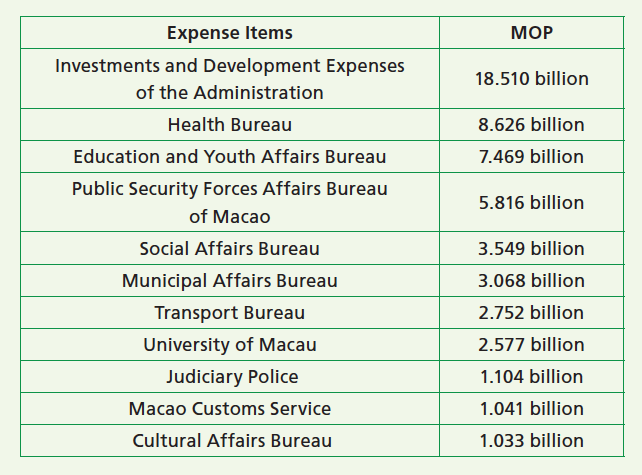 The Chief Executive unveiled the proposed 2021 budget for the SAR at his policy address. The total was MOP 96.063 billion (US$12.032 billion), with the largest chunk – MOP 50.4 billion (US$6.3 billion) – coming from franchise and concessions revenue. He forecasted the total expenditure for 2021 as MOP 95.216 billion (US$11.926 billion). Here are the 11 government departments and other bodies that will receive the lion’s share of the budget…

Planning for the future From the Editor: Planning Macao’s future