Dr. Sun Yat‑sen, forerunner of the Chinese Revolution, spent 16 months in Macao upon completing his medical studies in Hong Kong in 1892. During his stay, he opened two clinics where he treated patients with both Western and Chinese medicine.

One of these clinics, restored to its original condition, opened to the public this November after five years of steady effort by the Cultural Affairs Bureau (IC) of the SAR government. 12th of November 2016 marks the 150th anniversary of Sun’s birthday, an event being celebrated across the Chinese‑speaking world.

In Macao, the anniversary was marked with a photograph exhibition of Sun Yat‑sen’s life in the territory. The event was organised by the Macao government.

“It was one of the earliest clinics in Macao opened by a Chinese that sold Western pharmaceuticals and served as a Western medical clinic,” says Deland Leong Wai Man, head of the IC’s Department of Cultural Heritage. “It has great significance in the history of medicine in Macao. The clinic is also valuable as evidence of his life before his mission as a revolutionary.”

The clinic is located at 80 Rua das Estalagens. Admission is free, and the restoration includes a temporary exhibition of Sun’s life. A permanent exhibition will be installed within the next couple of years. The structure comprises 525 square metres of built‑up area on 188 square metres of land. It was built prior to 1892 in a busy Chinese residential and business district.

The clinic becomes the latest of several sites in the city officially connected with Sun: others include the house where his first wife lived until her death in 1952 and a 17.3‑acre park – Macao’s largest – named after him.

Overcoming a multitude of engineering challenges

“The project has cost MOP13 million,” according to Leong. “The government acquired the site in 2011. Our principle in restoration is to use original materials, which were not easy to find.”

The main challenge for the IC was the condition of the original building which had deteriorated greatly in the 120 years since Sun’s departure. It was repurposed as a silk shop, then a retail store for electrical goods and finally a storehouse. “We had a lot of work to do,” confesses Leong. “First, we had to repair the roof, to stabilise the structure. Many of the bricks had crumbled.”

Of course, this particular kind of old brick is no longer produced, so the IC had to go to sites where old buildings were being demolished and salvage. It was a similar situation with the roof tiles. Skilled conservationists were also employed to repaint the interior in its original form.

During renovation of the rear part of the building, a large amount of rough stone and silt was uncovered. After excavation, archaeologists determined that these had been part of the earliest piers in Macao. This archaeological work caused a severe delay in the restoration.

“The base of the structure was close to the water, so the foundation was weak,” says Leong. “So we had to work there, to prevent salt from coming up through the walls and causing decay. The engineering work was very hard. It is a narrow structure, with buildings on each side and there is no side access,” she adds.

Each floor of the clinic is comprised of front and rear sections. A lift, toilet and staircase in the rear section have been installed for the convenience of the public.

The clinic becomes the latest of several sites in the city officially connected with Sun: others include the house where his first wife lived until her death in 1952 and a 17.3‑acre park – Macao’s largest – named after him

Macao played an important part in Sun’s life. It was there that his father Sun Dacheng worked as a cobbler in a shoe store for 16 years, from 1829 to 1845. He returned to his hometown of Cuiheng Village in what was then Xiangshan County, 37 kilometres from Macao. There he farmed and married Madame Yang. Their son Sun Yat‑sen was born 12th of November 1866.

In 1879, mother and son passed through Macao on their way to Hong Kong. There they boarded a steamship for Hawaii where Sun received his education in America.

He returned to his hometown in 1885 to marry Lu Mu‑zhen, the daughter of a Chinese merchant in Hawaii. It was a marriage arranged by the two families as was the custom at that time.

After graduating from secondary school in Hawaii, Sun went to Hong Kong where he spent five years studying at the Hong Kong College of Medicine for Chinese, of which he was one of the first two graduates in 1892. During his time there, he often travelled to Macao to visit his friend Yang He‑ling; the two discussed reforming China amongst a group of friends.

In September of 1892, Sun moved to Macao and worked at Kiang Wu Hospital, established in 1871 by and for the Chinese. It offered traditional Chinese medicine (TCM) and had no facilities for Western treatment or operations. At the time, the majority of Macao’s Chinese doctors practiced TCM, and many Chinese regarded Western medicine with fear and scepticism.

While Sun was a diligent doctor, his greater mission in life was to reform China. In the 1890s, he wrote a long article to Li Hong‑zhang, one of the highest officials of the Qing government, setting out the reforms he considered necessary to modernise China and confront Western powers. Li did not dignify him with a response. This was a critical moment for Sun: believing that the government would not reform, he concluded that violent revolution was the only way forward.

While studying in Hong Kong, he met a Macanese named Francisco Hermenegildo Fernandes who was sympathetic to his ideas. Fernandes was a translator at the Hong Kong High Court and became a strong supporter. In 1892, Fernandes returned to Macao and founded the weekly newspaper Echo Macaense printed in both Portuguese and Chinese. It published Sun’s articles promoting political reforms as well as news of his medical work. The newspaper was distributed in Xiangshan, Guangzhou, Hong Kong, Fuzhou and Xiamen in addition to Macao.

While Sun was a diligent doctor, his greater mission in life was to reform China. In the 1890s, he wrote a long article to Li Hong‑zhang, one of the highest officials of the Qing government, setting out the reforms he considered necessary to modernise China and confront Western powers

Fernandes’ family had lived in Macao for generations. It was Fernandes whom Sun asked to apply on his behalf for a licence to practice in Macao. But Sun’s career as a doctor was short‑lived. He closed his practice in Macao in September 1893 having decided that his mission in life was not to treat the sick but lead a revolution. Even while he was a practicising doctor, he would meet with his associates in Macao and Guangdong to plan the revolution.

This finally brought him to the attention of the Qing government which began putting pressure on Macao authorities. This pressure became intolerable after an uprising incited by Sun and his compatriots in Guangzhou in October 1895; the rebellion ultimately failed having been leaked beforehand to the government. However, it put Sun on a wanted list, and the Hong Kong government banned him from entering the city.

It was at that moment that Fernandes did him another great service. First, his newspaper Echo Macaense published an article by Sun explaining the rationale for the uprising. Then, Fernandes hid him while he was a wanted man, using friends and connections to smuggle him out of Macao by boat, first to Hong Kong and then Japan.

As a token of gratitude for saving his life, Sun later gave his friend his medical equipment and daily items, now on display at the Dr. Sun Yat‑sen Memorial House in Macao. His dear friend Fernandes is buried in the local St. Miguel Arcanjo Cemetery.

The aftermath of a successful revolution

After numerous failed uprisings, the revolutionaries finally succeeded when a Qing army rebelled in Wuhan on 10 October 1911, leading to the overthrow of the government. On 19th of December, representatives from 17 provinces elected Sun to act as provisional president of the Republic of China. He held the post for only three months before being forced to give up the position to Yuan Shi‑kai, the most powerful warlord in China.

In May 1912, at the invitation of some local Chinese businessmen, Sun made his first visit to Macao since being forced out in 1895. It would also be his last.

On 29th of March 1925, 20,000 people in Macao – one fifth of its population – attended a memorial service for Sun at Kiang Wu hospital where a statue of him now stands in his honour.

On 19th of December, representatives from 17 provinces elected Sun to act as provisional president of the Republic of China. He held the post for only three months before being forced to give up the position to Yuan Shi‑kai, the most powerful warlord in China

By then, several members of his family were living permanently in Macao. In 1913, his wife Lu Mu‑zhen had moved there with their son, two daughters and his brother Sun Mei who became a local businessman. He died in Macao in 1915, at the age of 61. Lu continued to live with her family at their home in Macao with her three children and grandchildren. In 1930, an explosion at a nearby army munitions warehouse destroyed the house. Deeply embarrassed, the government provided funds, supplemented by money from her son Sun Ke. With the money, the family built a spacious three‑storey structure that is open to visitors today. Lu was a devout Baptist and devoted much of her time to the church and charity. She died on 7th of September 1952, at the age of 85.

In 1958, the building was named the Sun Yat‑sen Memorial House. It has since become one of Macao’s most popular visitor destinations. In the courtyard stands a life‑size bronze statue of the doctor‑turned‑revolutionary by his friend Umeya Shokichi. It is one of three statues of Sun in Macao. He also has a garden and two roads named after him.

The newly restored pharmacy will be an important addition to this legacy: another important stop for those coming to Macao to retrace the steps of the father of the Chinese revolution. 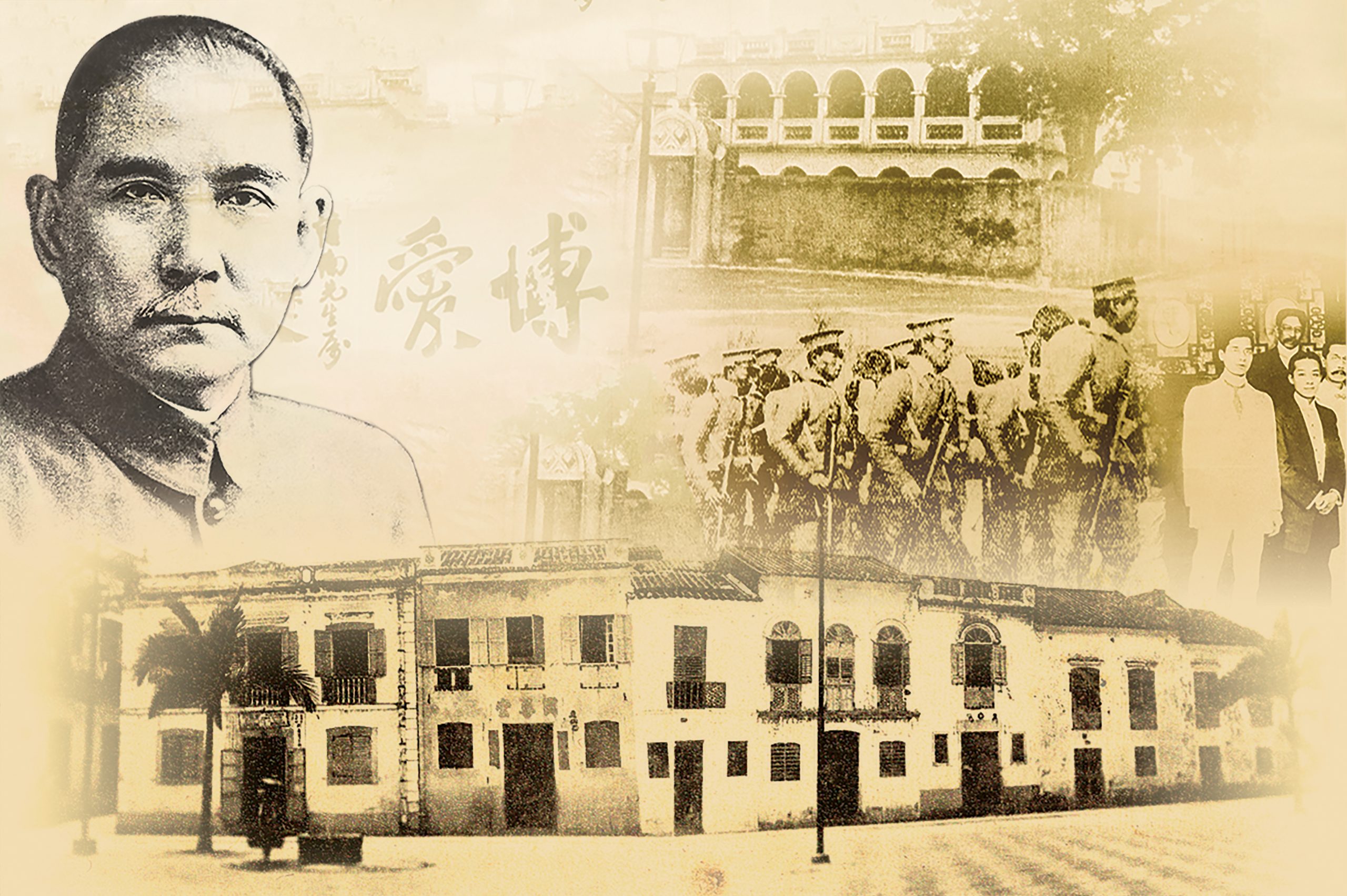