Historically, Macao has been a safe haven for men, women and children fleeing conflict and persecution in neighbouring countries. Within this small community, mutual respect has always been fundamental.

Around the world, the idea that women are inferior has deep roots in our cultures, in both the west and east. It has been woven over millennia not only into our social, economic and political fabric but also into our language. Ancient Greek philosopher Aristotle once wrote, “The female is, as it were, a mutilated male… the female, as female, is passive… and the male, as male, is active.” The impact of these attitudes has varied in different societies, making a “one size fits all” approach to changing them impossible.

Agnes Lam, University of Macao Department of Communication assistant professor, has been working on gender equality in Macao for years.

For her, the biggest challenges to equality are ideologies rooted in tradition and culture. “Culture and tradition are often the primary source of suppression. Although many women in Macao are free to decide their own path, when it comes to raising a family, some women abandon their careers as they deem it necessary to ‘abide’ by a tradition that frowns upon mothers who do not stay at home. It becomes a self‑fulfilling prophecy.”

Women in Macao have grown up in a tradition where they are expected to be caretakers to the family and the home. But culture is not written in stone; it is ever-changing. Our customs develop and ideologies adapt to the times. In some places this has happened more slowly than others.

Macao was forward‑thinking in its approach to gender equality before it became a Special Administrative Region of China in 1999. Portugal ratified the 1979 Convention on the Elimination of All Forms of Discriminations against Women in 1980 by way of Law No. 23/80, which was then extended to the Portuguese administration of Macao by Decree No. 25/98. After Macao’s return to China in 1999, the law was made applicable to the city via the Chief Executive Notice No. 3/2001.

The Convention seeks to understand how gender equality can be achieved. Every four years, it expects state parties to “submit a national report to the Committee, indicating the measures they have adopted to give effect to the 30 articles of the Convention.” The latest report published by the Macao government was in 2012.

Article 25 of the Basic Law of the Special Administrative Region (SAR) of Macao also provides that “Macao residents are equal under the law, without discrimination on the grounds of nationality, ancestry, race, sex, language, religion, political or ideological convictions, economic standing and social conditions.”

But what is the value of laws if they are not applied? Lam argues that the laws lack teeth and appropriate punishments are not handed down to those who break them.

We have advanced far from the conception of Nora seen merely as a “little bird” and an object of desire in A Doll’s House (Henrik Ibsen, 1879). Similarly, in our society, the virtuous submissive Jane in Pride and Prejudice (Jane Austen, 1813) no longer reflects the modern woman. So who is the modern woman in Macao and how has this city encouraged and supported her?

In talking to women in different sectors, all share a similar sentiment on gender equality: It has never been something that limited them or constrained their thoughts. They believe that both SARs (Macao and Hong Kong) are forward-thinking and being a woman has never been a hindrance to progressing in society. This sentiment was shared by Sonia Chan Hoi Fan, Secretary for Justice and Administration; Sister Juliana Devoy, Director of Good Shepherd Center; and Michelle Ho, CEO of McDonald’s.

Free education from kindergarten to secondary education was implemented in public schools and semi‑private schools in Macao in 1995, an important factor that contributed to gender equality. According to the latest social characterisation of women in Macao (Caracterização social das mulheres de Macau 2013, original document in Portuguese) released by the Statistics and Census Service (DSEC) and a 2015 women’s report published by professor Agnes Lam, 39.5 per cent of the female population had received a higher education degree in 2015 compared to only 3.7 per cent in 1991 (See Figure 1).

“Education is the most powerful weapon, which you can use to change the world,” said Nelson Mandela, former president of South Africa. Lam echoes this view; “Education is the only way to change ideologies.” Marjory Vendramini, founder of Cradle of Hope Association Macau, ensures that all the children in her centre receive an education, “it is the most important thing I can do for them.” To have a gender‑equal world is to place a strong emphasis on education. 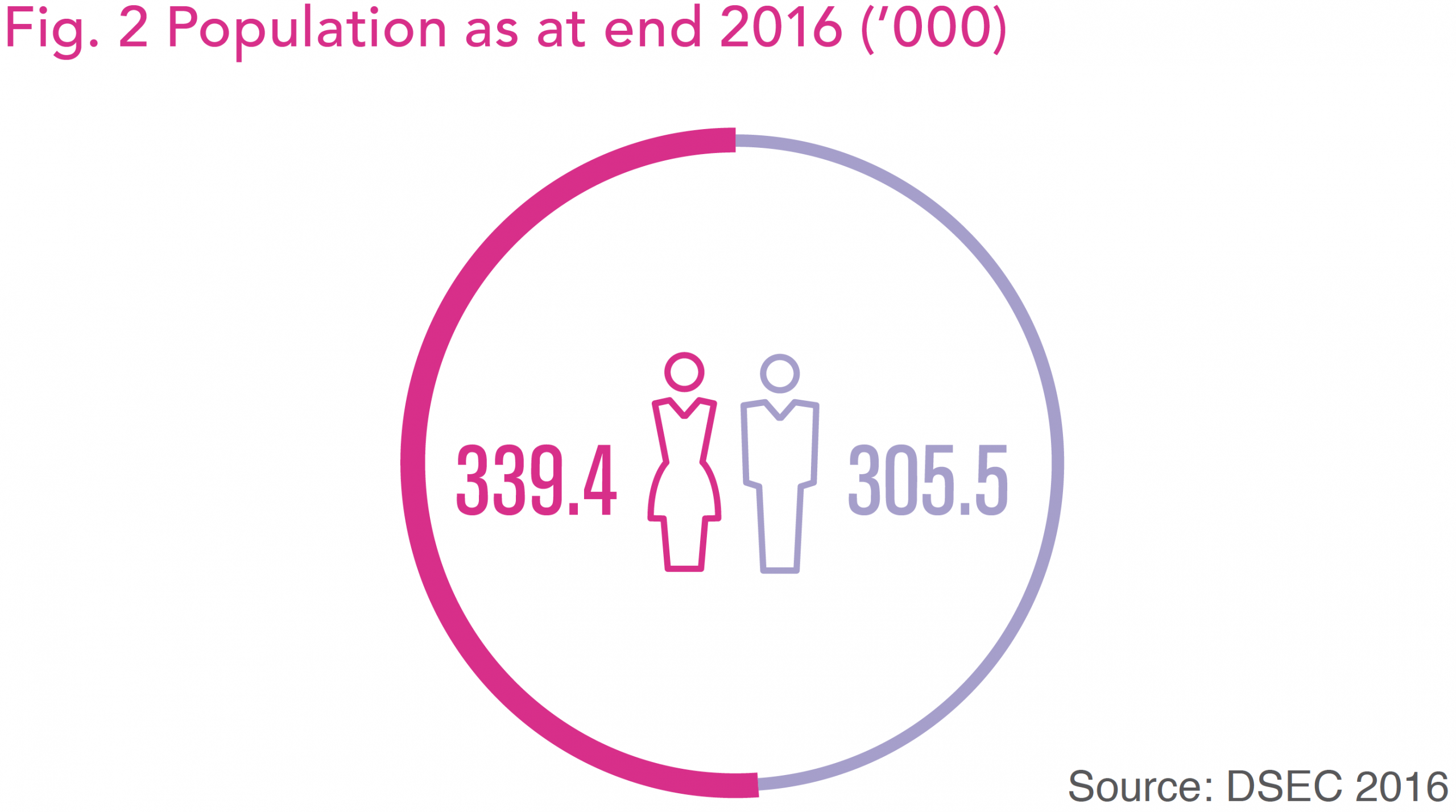 According to the latest available statistics, in 2011, 52 per cent of technicians and intermediate level professionals in the workforce were women, compared to 44.9 per cent in 1991 (See Figure 4). The most significant change was among government officials, directors and business leaders; in 2011, the percentage was 31.8 per cent, 10 per cent higher than in 1991.

However, the Women’s Issues 2015 Research Report also recorded that 60 per cent of its participants did not get promoted in a period of five years of employment.

According to the United Nations “The World’s Women 2015” report, globally, approximately three quarters of all men and half of women participate in the labour force. Women’s labour force participation rates are the lowest in Northern Africa, Western Asia and Southern Asia. Women earn less than men across all sectors and occupations and this gender pay gap persists across all economic sectors and occupations. In global terms, then, Macao is ahead of many jurisdictions.

The guardians of Macao

The Women’s General Association in Macao was founded in 1950; today it has over 30,000 members. It is the oldest group in Macao offering support to women. It aims to unite and encourage women from all walks of life to take an active part in Macao’s community. It also seeks to protect women’s rights. It has refugee centres, support groups, health centres, counselling and other services. With the increase of divorcees and single mothers during the past decade, the association also now focuses on daycare facilities.

Another important organisation is the Good Shepherd Centre in Macao, founded in 1990 to respond to the needs of women in crisis situations. It offers shelter, counselling, and advocacy services to victims of domestic violence, pregnant girls, women in family conflicts and more serious situations such as human trafficking. According to their annual report in 2015, Good Shepherd sheltered a total of 63 people. The biggest reason for seeking shelter was domestic violence.

Sister Juliana Devoy from Good Shepherd moved to Macao in 1989. She said, “Doing small actions in Macao can have such a big impact; in Hong Kong, it is not like that. Here, almost every day, I bump into someone on the street that has either lived at the Good Shepherd or has received help from us in one form or another.”

She has moved mountains – she brought to light human trafficking in Macao and caused an anti–trafficking law to be implemented in 2008. In 2016, Good Shepherd had another victory – a cause they had long been fighting for, listing domestic violence as a public crime: Law Number 2/2016 on the prevention and combating domestic violence (Lei n. 2/2016 Lei de prevenção e combate à violência doméstica). Sister Juliana now plans to work on the issue of child adoption in Macao to try to update its outdated laws.

In 2005, the Consultative Commission for Women’s Issues (Comissão Consultiva para os Assuntos das Mulheres), comprised of government and private entities, was formed in Macao; in late 2016, it was renamed as the Commission for Women and Children’s Issues. (Conselho para os Assuntos das Mulheres e Crianças). It now serves as an advisory body for the promotion of issues related to women and children; its president is Alexis Tam Chon Weng, Secretary for Culture and Social Affairs. The Commission is being integrated into the governmental social affairs office of Macao.

Education is the most powerful weapon, which you can use to change the world

Some ask whether the scope of this commission is too wide, pointing out that women and children’s issues are different and they should not be put in the same organisation. On the other hand, Macao is a small city and the number of cases and issues is manageable and can be dealt with by a single commission.

The World Economic Forum Global Gender Gap Report aims to quantify gender equality progress in each state. In 2016, it listed the highest-ranked country for gender equality as Iceland at 0.874 and the lowest as Yemen at 0.516.

As a SAR, Macao is not included in this report but using the same criteria (economic opportunity, education, political rights, health and mortality), a 2008 report on the condition of women in Macao (Relatório sobre a Condição da Mulher em Macau em 2008) calculated Macao’s score to be 0.7067 out of 1. Mainland China’s 2016 score was 0.676. Since 2008, no other official report has been published documenting Macao’s gender equality index.

In the past, migrants from around the world came to Macao with different beliefs systems, cultures and traditions. And the famous term “melting pot of cultures” very much describes how this society was built.

An open‑minded, multi–cultural, educated society enables people to challenge outdated traditions and beliefs empowering women to succeed and this can be shown by the case study of Macao.