As the number of institutions in Macao has rapidly increased, so has the quality of educational services as the universities respond to the demands of a fiercely competitive environment.

Macao aims to be the training hub for leisure and tourism for the Greater Bay Area (GBA), as well as the premier centre in Asia for the study of Portuguese, said Sou Chio Fai, head of the Tertiary Education Services Office (GAES) of the Macao government. Operating under the Secretary for Social Affairs and Culture, GAES has overseen higher education in Macao since its establishment in 1992.

The sector has made astonishing progress in the intervening years: Macao now boasts ten tertiary educational institutions, which served 32,750 students and employed 2,265 teaching staff during the 2016/2017 academic year. They offer 267 programmes, including doctorates, master’s and bachelor’s degrees. In addition, 19 overseas institutions were granted approval in 2016 to offer 34 tertiary education programmes.

“This year, 93–94 per cent of Macao secondary school graduates went to university,” said Sou. “If they do not, it is not because of financial problems; the government offers loans and scholarships.”

An impressive achievement given that the first university in Macao, the University of East Asia, was set up only in 1981. Renamed the University of Macau following a government takeover a decade later, it paved the way for the other nine tertiary institutes, all established since 1991.

On 15 June President Xi Jinping sent a letter to the University of Macao and MUST, saying that he hoped they would make a contribution to the national effort in science and technology and nurture talent for the GBA. It showed his support and concern for education in Macao.

Moving up the ranks

In 2011, Macao welcomed two State Key Laboratories, one in Analog and Mixed‑Signal VLSI at the University of Macau (UM) and one in Chinese Medicine Sciences jointly established by UM and the Macau University of Science and Technology (MUST). This year, we are expecting the central government to approve two more: Smart City Internet, to be located at UM, and the Lunar and Planetary Science Laboratory at MUST.

For Sou, the presence of these labs demonstrates Macao’s importance in the national scientific plan. “Last Friday [15 June] President Xi Jinping sent a letter to the University of Macau and MUST, saying that he hoped they would make a contribution to the national effort in science and technology and nurture talent for the GBA,” Sou said. “It showed his support and concern for education in Macao.”

Of the ten institutes in Macao, four offer a comprehensive range of courses while the other six specialise in particular fields, like tourism, nursing, management, and policy.

The most spacious and best equipped is UM, which moved to a new 1.1 sq km campus in 2014. Located on the neighbouring island of Hengqin (part of Zhuhai city), the central government agreed to place the site – nearly 20 times larger than the university’s original campus – under the jurisdiction of Macao.

“This was not easy to do,” Sou noted. “Macao is very short of land. The conditions and study environment in the new campus are very good. This is one of the strong points of the tertiary education sector in Macao. It also shows the support of the central government for the SAR.”

As the number of institutions in Macao has rapidly increased, so has the quality of educational services as the universities respond to the demands of a fiercely competitive environment. Universities in mainland China, Hong Kong, Taiwan, and overseas compete intensely with each other for students, faculty, and funding, from both public and private sources.

“UM appeared in both the THE and the QS [World University] rankings,” said Sou, noting that another Macao institution, MUST, was ranked among the top 100 institutions in Greater China. He also pointed to the engineering department at UM, recognised in 2014 by the Washington Accord, allowing graduates to apply to other member colleges and strengthening the programme overall. The Institute for Tourism Studies, recognised by the UN World Tourism Organization, ranks second in its field in Asia and in the top 20 worldwide in the QS World University rankings in 2017.

Of the nearly 33,000 higher education students in Macao, just under half – 15,000 students – come from the mainland. “Their scores in the university entrance exam [高考, gaokao] are rising each year. This shows that our institutions are becoming more attractive.”

Another measure of the progress of the universities is their research and development. Since its opening in 2010, the State Key Laboratory of Analog and Mixed‑Signal VLSI at UM has made significant progress in enhancing the city’s scientific research capacity. In fact, according to Sou, the papers published on microelectronics by the UM laboratory accounted for half of those published on the subject in the Greater China area.

Where Macao has developed gradually is in attracting foreign students. Currently, it has less than 1,000 non‑Chinese students. Its institutions are still new and little known abroad. Increasing the number of foreign students is part of the city’s objective to internationalise its universities.

“Take the case of a Macao person who has lived all his life in the city, including school and university. In his early twenties, he has never seen the world. His vision is limited,” Sou explained. “If he can live with foreign students, that will broaden his horizons.”

Previously, foreign universities did not want to co‑operate with those in Macao, which greatly limited opportunities to bring in students from abroad. “That is changing,” he said. “More and more are willing to do exchanges with our institutions.”

Colleges in Macao offer courses in additional languages – English, Mandarin, and Portuguese – making them more attractive to foreign students. While there are no set targets for foreign students, they remain an important asset in developing Macao universities. One group who are very willing to come are those from Portuguese‑speaking countries and those who wish to study the language.

“In Europe, the best place to study Portuguese is Portugal. In the Americas, it is Brazil. In the Asia–Pacific region, it is Macao,” Sou pointed out. “Here we have the best environment for learning, with radio, television, and newspapers in the language and it’s being spoken on the street. We have over 80 professors of Portuguese who hold doctorate degrees and publish more material in the language than all the mainland universities put together.”

These same institutions rely on Macao to provide the human capital that powers their Portuguese‑learning programmes. “In the mainland, about 38 universities offer Portuguese as a subject. Many of their teachers were trained in Macao. We invite teachers of the language from the mainland to come here.” 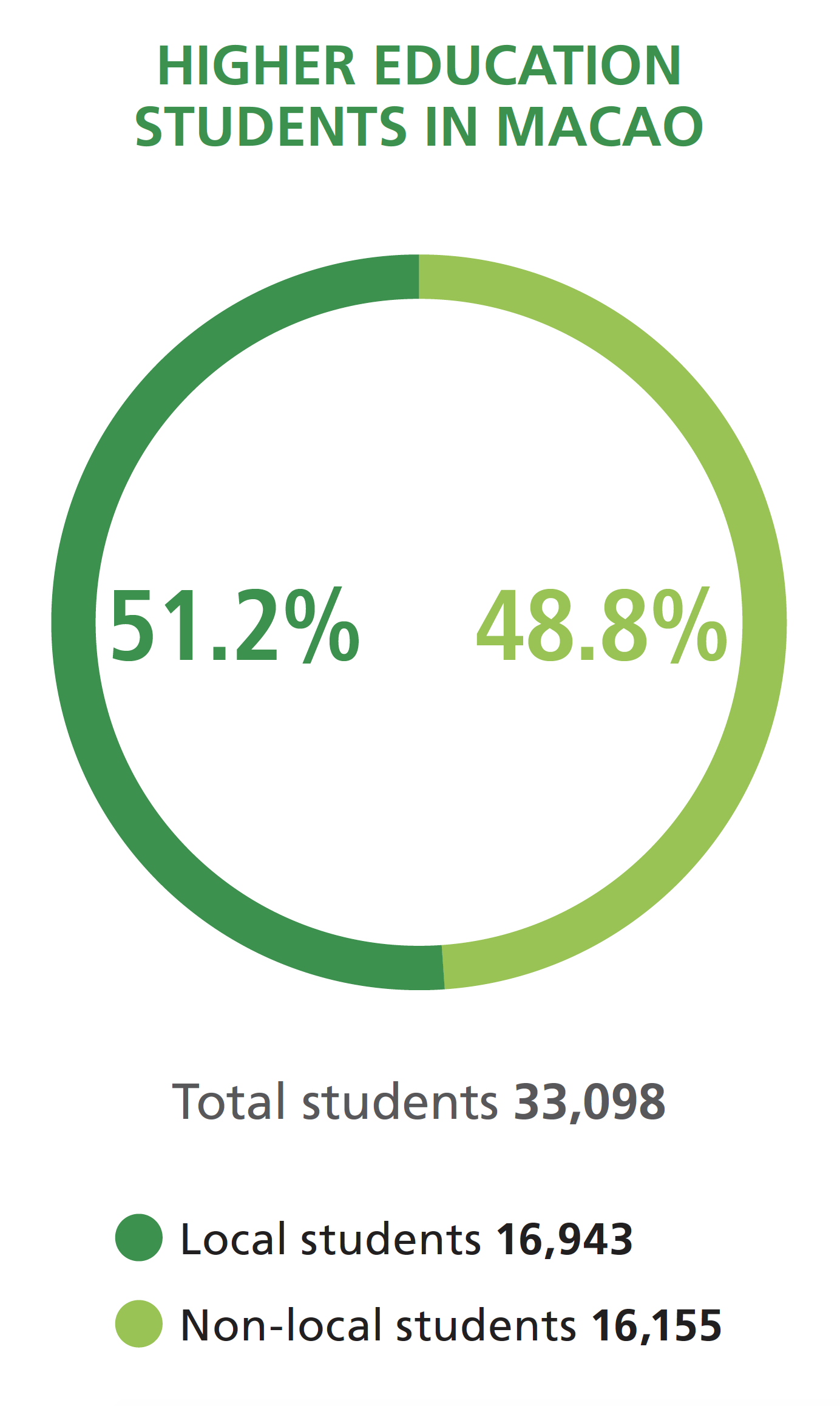 Ebb and flow of students

One challenge faced by all educational institutions in Macao is a lack of local students. In 2020, only 3,500 students are expected to graduate from the city’s high schools, down from 4,800 this year and a peak of 7,000. The main reason for this is the SARS epidemic of 2002–2003 in southern China, which led to more than 8,000 cases and 774 deaths in 37 countries, most of them in mainland China.

This drop in the number of local students, Sou said, will result in an adjustment in the percentage of mainland students that universities can admit.

One institution, however, likely won’t be aided by these adjustments. The University of Saint Joseph, a comprehensive institution founded in 1996 by the Catholic University of Portugal, has no mainland students.

“I think that this is because of the lack of diplomatic relations between China and the Vatican. It is not an issue of the quality of its teaching,” Sou explained. “The Ministry of Education [in Beijing] supports the development of education in Macao, including St Joseph. I am optimistic on this. If relations are established between the two sides, the problem will be solved automatically.”

While the projected number for 2020 remains low, Sou said that the number of Macao high school graduates will bounce back during the 2020s, eventually returning to 7,000–8,000 a year again.

“By 2020, 40 per cent of permanent residents of Macao will have received tertiary education. We need a plan for the remaining 60 per cent,” he said.

Macao residents who do opt to study at university are eligible for an annual grant of MOP3,000 (US$371) to buy materials. Different government departments also offer loans and scholarships, including for study abroad.

“Returning here to work is not a condition of these loans and scholarships,” Sou said. The loans must be repaid, of course, through the type of earnings that higher education institute can offer.

Where Sou expressed hope that Macao students receiving government loans would choose to return to the city, scholarships offered by the Macau Foundation make returning a requirement. These scholarships apply to those earning bachelor’s degrees at any of the top 100 universities in the world, on the condition that recipients return to Macao (or the mainland) and work for three years.

For much of recent history, Macao has been known primarily as a gambling and tourism hub, drawing tens of millions of visitors each year. Yet the city is increasingly gaining a reputation as a centre for higher education, expanding beyond degrees targeted toward more traditional Macao fields – tourism, language, and translation – to strengthen its capacity in the sciences and more comprehensive education.

This, Sou believes, is why Macao’s tertiary education institutes will play an important part in the development – and ultimately, the success – of the Greater Bay Area. He pointed to the city’s well‑cultivated status as a world centre for leisure and tourism as one important area where Macao can excel in training. Portuguese‑language learning, a key asset as China looks to strengthen relations with the Portuguese‑speaking world, offers another area of leadership for Macao.

The city’s State Key Laboratories provide a platform to elevate the region’s scientific capabilities, with the announced Smart City Internet lab offering an important regional foothold in the growing fields of big data and the Internet of Things – areas key to modern urban development.

Then there are relations with mainland China. “We can co‑operate with universities in the mainland, with students doing two years here and two years there,” Sou said. “We can provide resources and do joint projects, such as in law.”

NUMBER OF STUDENTS AT HIGHER EDUCATION INSTITUTIONS IN MACAO