Macao played host to Xi Jinping in December – and China’s President said during a speech in the city that Macao and Hong Kong’s issues are the nation’s ‘internal matters’ and that no external forces can ‘dictate things to us’. 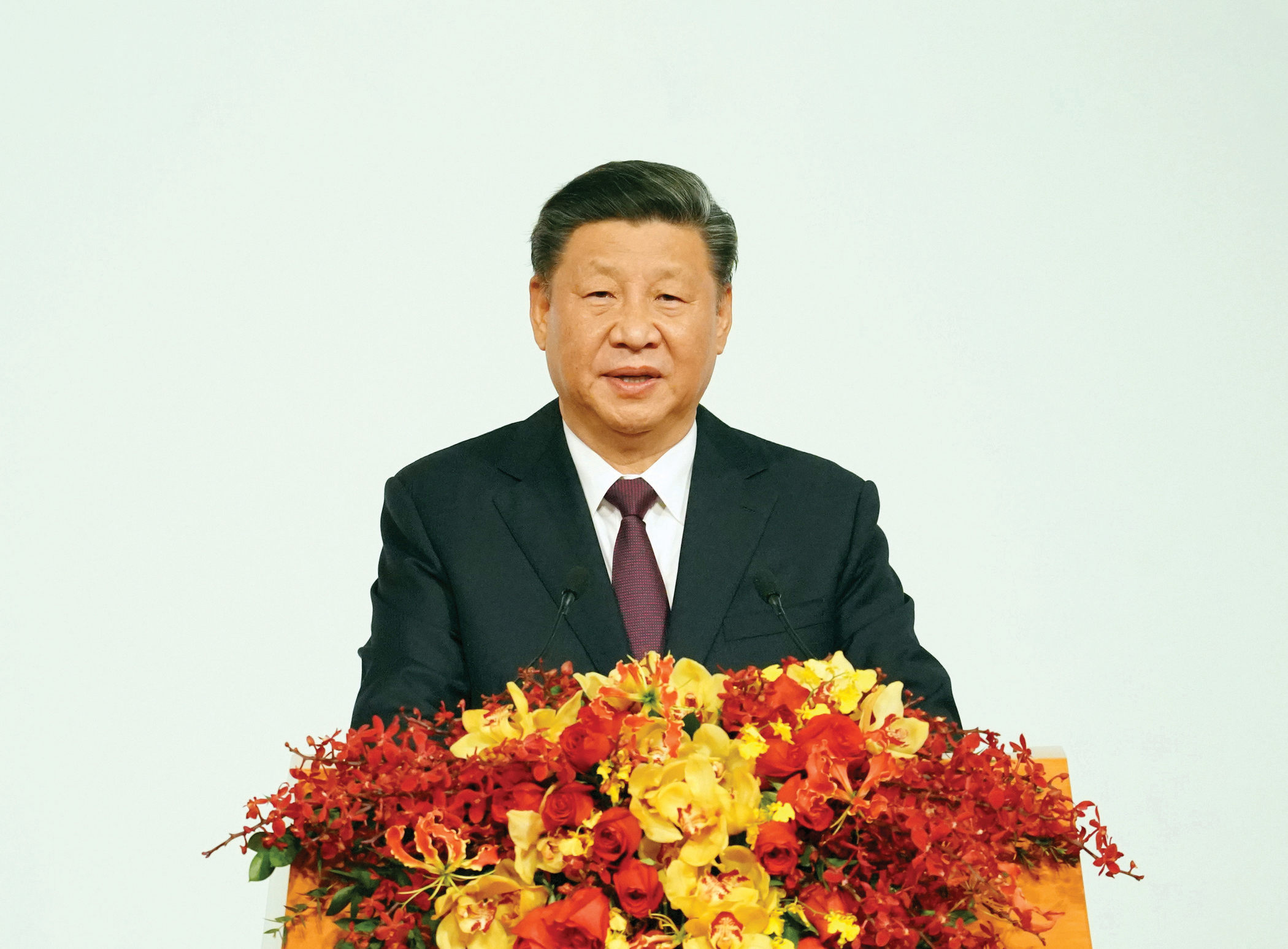 Macao became a place of celebration in December during the 20th anniversary of the establishment of the Special Administrative Region. There were parties, parades and fireworks on and around 20 December to mark two decades since the handover of administration from Portugal to China. And one of the centrepieces of the celebrations was the visit of President Xi Jinping for three days in the SAR.

On the final day of his visit – which took place between 18 and 20 December – Xi gave a speech at the Macau East Asian Dome in Cotai. In the speech, he stressed that with the return of Macao and Hong Kong to the motherland, the handling of affairs in the two Special Administrative Regions is ‘strictly China’s internal matter’ so ‘there is no need for any external forces to dictate things to us’.

Xi, who spoke during the swearing-in ceremony of fifth-term Chief Executive Ho Iat Seng, stated that the Chinese government and people have a ‘rock-firm determination’ to uphold national sovereignty, security and the country’s development interests. “We will never tolerate any external interference in Hong Kong and Macao affairs,” he added.

Xi said, to an audience of 1,100 people, that, over the past two decades, with the strong support of the central government and the Mainland and under the leadership of Chief Executives Ho Hau Wah and Chui Sai On, the SAR’s government and people from various sectors of Macao society have worked closely together to take the city into its ‘best development’ period in history. A shining chapter has been written in the successful practice of ‘One Country, Two Systems’ with Macao characteristics, Xi added.

During the 30–minute speech, Xi pointed out that in the past 20 years Macao has ‘solidly established a constitutional order’ on the basis of the national Constitution and the SAR’s Basic Law, and it has improved its governance system. Macao’s constitutional responsibilities for upholding national sovereignty, security and the nation’s development interests have been effectively implemented, Xi underlined. And he said that the executive authorities, legislature and judiciary of the SAR have performed their duties in ‘strict accordance’ with the law. In doing so, he added, they have ensured the ‘smooth functioning’ of the ‘executive–led system’ with the Chief Executive at its centre. As a result, according to Xi, the SAR has made orderly progress in democratic and political development, and Macao residents’ extensive rights and freedoms under the law have been ‘fully guaranteed’.

Xi said that, in the past 20 years since its return to the motherland, Macao has achieved phenomenal economic development and continuous improvements in people’s lives. Steady progress has been made in establishing Macao as ‘one centre, one platform, one base’, he said. ‘One centre, one platform, one base’ refers to Macao’s role as global tourism and leisure centre, a commercial and trade co-operation service platform between China and the Portuguese–speaking countries and a cultural exchange and co–operation base with Chinese culture as its mainstream and the co-existence of different cultures, Xi pointed out.

The President also pointed out that significant results have been achieved in Macao’s ‘appropriate’ economic diversification and various emerging industries, such as conventions and exhibitions, traditional Chinese medicine and featured finance are booming, Xi said. Macao has taken an active part in the Belt and Road Initiative and the development of the Guangdong–Hong Kong–Macao Greater Bay Area, Xi noted, adding that people’s welfare benefits have ‘risen substantially’.

President Xi stressed that in the past two decades, Macao has enjoyed social stability and harmony and a fusion of diverse cultures. ‘Inadequate law and order’ – a problem before the city’s return to the motherland – was swiftly addressed and Macao is now one of the safest cities in the world, he said. People from all walks of life express their aspirations and views in a ‘rational manner’ with a sound co–ordination mechanism in place, he said. On such a basis, Macao has both contributed to Chinese culture and embraced diverse cultures, Xi underlined.

Secondly, the fellow compatriots in Macao truly have recognised ‘One Country’ as the premise and precondition of ‘Two Systems’, ‘unequivocally upheld’ the constitutional order established by the Constitution and the Basic Law, and respected the socialist system adopted on the Mainland and correctly handled issues concerning the relationship between the central government and the SAR. The executive branch, legislature and judiciary of the SAR have upheld the central government’s overall jurisdiction over the SAR while ensuring the SAR’s high degree of autonomy, Xi stressed.

We will never tolerate any external interference in Hong Kong and Macao affairs.

Thirdly, Macao compatriots have always maintained a strong sense of mission and responsibility in implementing the ‘One Country, Two Systems’ principle and have always kept the country’s overall interests and Macao’s fundamental interests firmly in mind. The President pointed out that intensive efforts have been made by the SAR’s government to focus on economic growth, effectively raise living standards, steadfastly uphold the rule of law, progressively advance democracy and promote social inclusiveness and harmony.

Fourthly, Xi said that Macao compatriots have a tradition of loving the motherland as well as a strong sense of national identity, belonging and pride, adding that this is the ‘most important’ reason behind the success of ‘One Country, Two Systems’ in Macao. He pointed out that the journey of ‘One Country, Two Systems’ is ‘long and hard’, adding that the world is experiencing changes unseen in a century and Macao is facing new dynamics internally and externally. In this context, Xi urged the new Macao government and all sectors of the city’s society to stand higher and look farther, break new ground while keeping to the right path and be ‘results-orientated’ and ‘hard–working’.

Secondly, the President stressed that a long–term perspective must be adopted when drawing development plans. With the goal of becoming ‘one centre, one platform, one base’ in mind, Macao needs to develop well–conceived plans, adopt a holistic and co-ordinated approach and implement the plans step–by–step. He also pointed out that Macao needs to carve out its role in national strategies, seize the opportunities provided by Belt and Road Initiative co–operation and of the Greater Bay Area, better leverage its own strength and sharpen its competitive edge, as well as to ensure good collaboration with Zhuhai in developing Hengqin, as it will create immense space for Macao’s long–term development and inject ‘fresh impetus’ into it.

Thirdly, Xi stressed that it must be clearly understood that the goal of development is to deliver better lives to the people of Macao, thus Macao needs to adopt institutional arrangements that are ‘fairer, more equitable and beneficial to all’, so that the fruits of development can be shared by all in the community. He pointed out that Macao needs to combine its development needs with the people’s needs and improve public infrastructure relating to transportation, energy, environmental protection, information and law and order. The SAR needs to solve ‘prominent issues’ in housing, healthcare and care for the elderly, and scale up assistance and support to the vulnerable. It is also important to keep developing education and put in place a high–standard education system, so as to create a more conducive environment for children and young people to grow and live to their full potential, Xi noted.

Fourthly, the President pointed out that the core value of loving the motherland as well as Macao needs to be upheld and encouraged so that everyone in society will be mobilised to contribute to Macao’s development. He said societal problems must be properly addressed for the greater good of social harmony. As a place where Chinese and Western cultures meet, Macao is well positioned to do more to promote international people–to–people exchanges and mutual learning between civilisations, the President concluded.

During a reception given by former Chief Executive Chui Sai On, Xi praised the economic and social achievements of the SAR over the past 20 years which have enabled ‘rapid and robust development’ in Macao and a substantial improvement in the well–being of its population. Xi, in a six–minute speech to 600 guests, praised the city for combining the principles and requirements of ‘One Country, Two Systems’ with the local reality.

President Xi also noted five points that he considered fundamental for Macao’s success at the reception. He named ‘the love of the motherland and Macao’ as the first point and stated that after the transfer of administration to China in 1999, ‘Macao patriots considered this aspect to be the most important and fundamental’. The consolidation of the Constitution and the Basic Law in Macao, the collaboration and balance between the Chief Executive and the executive and legislative bodies, and the independence of the judicial bodies were also mentioned by President Xi as important points that led to the development and progress of Macao.

Xi Jinping, who was making his sixth visit to Macao, also referred to the positive and proactive attitude of Macao and its population to be an integral part of national development, taking advantage of the opportunities created by the national strategies, such as the Belt and Road Initiative and the construction of the Guangdong–Hong Kong–Macao Greater Bay Area. He said: “Macao has been good at seizing the opportunities brought by the major development strategies and policies of the country.” He also considered that an atmosphere of inclusiveness and harmony had strengthened social cohesion.

Among the visits that Xi made to governmental departments, schools and other institutions in the territory in December were the future facilities of the Services Complex for Trade Co–operation between China and the Portuguese–speaking Countries, located next to Macau Tower, which he said was an important instrument for strengthening the city’s capacity to operate as a platform in tune with the needs of the country. He also met China’s representatives in Macao, the Mainland companies based in the SAR and members of the present and previous government. Plus, he visited the People’s Liberation Army headquarters and the troops stationed in the territory.