Record‐breaking crowds enjoyed a spectacular Formula 3 race to close the 2017 edition of the Macau Grand Prix.

The race weekend ended, as always, with the grand finale: the FIA Formula 3 World Cup. Motopark with VEB driver Daniel Ticktum took the top prize, snatching victory in the wake of a final lap that will go down as one of the most unpredictable in recent years.

Having come eighth in the qualifying event, Ticktum wasn’t the favourite to win, and up until the penultimate lap, the British 18‐year‐old wasn’t even in the podium line up.

The race started with Callum Ilott in pole position and Joel Eriksson, European runner‐up in the category and Ticktum teammate, sharing the grid front row. Ilott lost the lead early on – even before the mythical Lisboa Bend – putting Eriksson in front. But with yellow flags indicating the third lap in the circuit still incomplete, his lead came to a dramatic end: Eriksson inexplicably stopped in the Lisboa Bend, letting the competition pass, with Sergio Sette Câmara taking the lead. 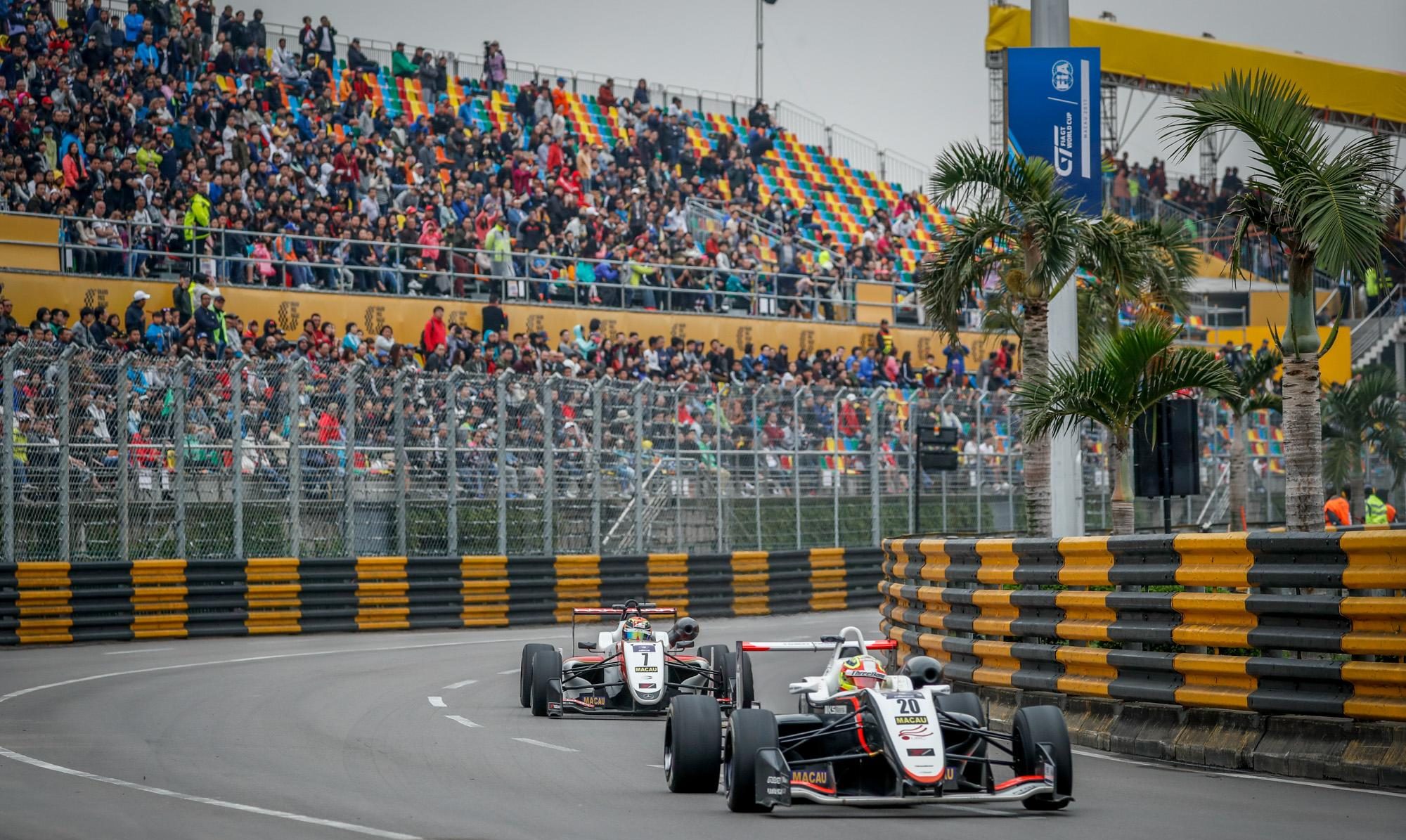 Then Daniel Ticktum made the move that would take him to the top of the podium. In the penultimate lap, he manoeuvred an excellent simultaneous overtake of Günther and Norris, taking control of third position in the race, while Câmara and Habsburg seemed locked in an epic battle for the championship title in Guia.

With pressure mounting, in the last corner of the race, Habsburg attempted an outside pass only
to knock himself and Câmara off course, leaving the road free for Ticktum to cross the finish line and to be crowned champion in Macao. Lando Norris came in second place and Estonian Ralf Aron, who started the race in 13th place, completed the podium. A dramatic end to an exciting race, capping off a weekend of triumph and tragedy at the Guia Circuit.

The fastest lap in the 2017 edition went to Mick Schumacher, driving for SJM Theodore Racing, at 2:12.651. Son of Michael Schumacher, seven‐time Formula 1 world champion and one of the best drivers in history, the 18‐year‐old German made his debut on the Guia Circuit and drew the attention of fans and media alike.

Winning in Macao is something of a family tradition: his father won on the Guia Circuit in 1990. Other famous winners, many of them exclusive to the competitive and restricted realm of Formula 1 drivers, include Ayrton Senna (1983), David Coulthard (1991), and Takuma Sato (2001) just to name a few.

Even without the title of champion on record, many drivers have experienced the Macao course. The city circuit has become a near‐mandatory test in motor racing, highlighting the stars of the future for more than 30 years. Names like Mika Häkkinen, Jacques Villeneuve, as well as more recent Formula 1 champions such as Sebastian Vettel, Nico Rosberg, Fernando Alonso and Lewis Hamilton, have all passed through Macao in their early careers before cementing their place in the elite of the sport.

Mortara and Huff unbeaten in Macao

The penultimate round of the 2017 WTCC season took place in Macao, with Huff unlikely to take the title after a difficult season. Driving for ALL‐INKL. COM Münnich Motorsport, Huff capitalised on his considerable experience in the Guia Circuit to secure pole position in the qualifying event.

The morning of the race was marked by rain, and Huff once again leveraged his knowledge of the circuit to dominate the race from start to finish. Honda’s Norbert Michelisz hung back in second, seemingly sacrificing the points he could accumulate in Guia toward clenching the global title.

Argentine Esteban Guerrieri, the other Honda driver, and Tom Chilton for Citroen battled for the other spots on the podium. Then Guerrieri made a mistake in the final lap and Chilton pounced, securing his third place win as he crossed the line just behind Michelisz. Championship leader Thed Björk finished a distant fifth.

Robert Huff’s victory came to confirm what many in the auto racing industry hold as true: knowing the Guia Circuit is crucial, and there is no one better than Huff to claim that experience. At 37 years old, Huff has been champion nine times with three different teams in his long career in the world of touring cars, and confessed that he feels lucky when he races in Macao.

Luck or experience was also to be found in the victory of Edoardo Mortara, known as Mr Macao, who returned to the city to collect his fourth GT World Cup title.The qualifying test to determine the starting grid was marked by one of the most spectacular crashes of the race weekend. A huge 12‐car pileup in the opening lap of the qualifier wiped out more than half the field; only eight cars were able to take the restart, Mortara among them.

Driving for Mercedes, Mortara secured pole position with Brazilian Augusto Farfus for BMW in second place on the grid. The race, also on a wet track, belonged to Mortara, whose leading position went unchallenged. Farfus fared far worse, forced to abandon his position in the race after suffering damages in a knock.

After the second caution period of the race, Audi driver Robin Frijns moved into the second place position, dogged by Maro Engel, another Mercedes driver who initially failed to make it out of the pits. Engel recovered well to end the race in third place, up from eighth on the grid, with Frijns taking second.

Only nine cars finished the 18 laps, the longest race in the Macau Grand Prix. The sixth win for Mortara, it was his first racing for Mercedes­ AMG, a fact highlighted by the driver, who also acknowledged that the crash in the qualifying event made it easier to surpass the competition.

After a less‐than‐spectacular debut at the Macao Motorcycle Grand Prix last year, Irishman Glenn Irwin came to the 2017 edition motivated to steal the title from the usual candidates, such as veteran Michael Rutter or Peter Hickman, reigning champion two years running.

Irwin destroyed lap records, beating Stuart Easton’s seven‐year‐old record by two seconds, putting the ambitious 27‐year‐old in pole position. Hickman began his race in second place on the grid, but
Edoardo Mortara, winner of GT World Cup took the lead before the first corner. Irwin, undeterred, tried to overtake on the narrowest section of the circuit. He succeeded at the exit of the corner of Fishermen’s Bend, realising his ambition for the first lap, to lead the race.

The thrilling race came to an abrupt end when a violent crash left Topgun Racing Honda rider Daniel Hegarty fatally injured. Hegarty came off his bike at a sharp bend in the sixth lap, crashing into the barriers and losing his helmet. The 31‐year‐old from Nottingham died on his way to hospital.

The organisation decided to end the race, counting as final classification the positions of the fifth full lap to the circuit. In a sombre podium ceremony, without anthems or champagne, organisers announced that Hegarty had succumbed to his injuries. Irwin, so eager to win going into the race, brushed off congratulations in favour of focusing people’s support on Daniel Hegarty’s family and team.

This year there was a joint race in the CTM Macao Touring Car Cup, encompassing cars with cylinder capacity up to 1600 cc and over 1950 cc – a mix that left some concerned about safety. A total of 36 cars started the race, 18 from each category, with a safety car on the track for two laps due to heavy rain.

Macao made a stronger showing with Leong Ian Veng, in the high cylinder category for Mitsubishi, dominating the race until the ninth lap when Lio Kin Chong, in 18th place, spun out. Leong braked, spinning into the barriers, but held onto first place when another incident in the second sector meant the race was red­flagged.

Felipe de Souza, also Macanese, contended for the title in the lower cylinder category, but gave up after a knock suffered near the curve of the Old Mandarin Hotel. It was up to Jerónimo Badaraco to ensure a Macao driver secured the top spot for the category. Half of the top ten finishers hailed from Macao.

The Chinese Racing Cup, also impacted by rain, saw only 11 cars finish. Macao driver Helder Assunção proved the fastest, a significant improvement on his fourth place finish in the qualifying round. Assunção faced strong competition from the mainland China and Hong Kong drivers, but kept his head in the difficult conditions and managed to raise the Macao flag highest on the podium in another excellent edition of the Macau Grand Prix.

Aiming for a bullseye