The long‑awaited new ferry terminal on Taipa island, capable of serving twice as many visitors as the current main sea entry point into the city will open to the public on 1st June.

Susana Wong Soi Man, Director of the Marine and Water Bureau, which took over the temporary terminal when it was completed in August 2016, describes in an interview what to expect from the massive new Taipa terminal. Covering 200,000 square metres, an area equal to 25 football fields, it boasts 16 berths for passenger ferries, 3 berths for larger ferries and cruise ships, and 127 immigration counters. The heliport, with space for five helicopters, takes advantage of the close proximity to the city’s international airport to develop sea‑air transport, offering faster and simpler means of transport for tourists.

“It has a final annual capacity of 30 million visitors,” Wong says. “Initially, we expect the new terminal to handle about 30 per cent of the traffic, against 60 per cent at the Outer Harbour. This will gradually shift to 50‑50.” Wong adds that there are no plans to close the Outer Harbour terminal. “It still serves an important purpose, and both Macao residents and foreigners are used to it.”

The new terminal has 740 parking spaces for cars and 196 for motorcycles, far more than at the Outer Harbour, making it simpler for residents to park there before taking the boat, and for buses to pick up and drop off tour groups.

Within a few minutes walking distance of a stop on the new Light Rail System that will connect to stops in Taipa, it gives visitors easy access to its big casinos and hotels. Construction of the Taipa section began in 2012; it is due to be operational in 2019. This 9.3‑kilometres long section will have 11 stations with stops at the Cotai casino resorts and the international airport, as well as the Taipa ferry terminal. Once all of these are operational, it will greatly reduce the road congestion in peninsula Macao. Currently, most visitor groups arrive at the Outer Harbour and take buses to reach the resorts. In the future, they will be able to walk to the Light Rail Station and go directly to their destination.

The new Taipa Ferry Terminal will roll out in a series of phases. In the first phase, ferry services moved from the provisional terminal to the new one, while maintaining the current number of ferry operators, destinations, routes, and sailings. Eight of the sixteen berths that opened give passengers access to basic services, such as self‑service machines. Shops, travel agency counters, and eateries will become available in phases. This gradual process serves to optimise all types of services at the terminal.

The second phase of the Taipa terminal will include the demolition of the temporary terminal used during construction, as well as the addition of new buildings and facilities.

Construction of the new terminal began in 2005, with a budget of MOP580 million, with completion due for 2007. A decade later, the final cost is MOP3.8 billion. Many residents question why the construction has taken so long and the cost has risen more than six‑fold.

“The scale today is much larger than originally planned,” says Wong. “Initially, it was to be a complement to the Outer Harbour with eight berths. But with the rapid increase in tourist arrivals, we knew the new terminal needed to be larger than the one at the Outer Harbour.

“The engineering work was also complex, to build a large platform to carry such an enormous weight. To illustrate this, the department in charge of the construction took members of the Legislative Assembly and others to the site to show them the work,” she explains.

In 2016, Macao received 30.95 million visitors, up 0.8 per cent from 2015. When the project started in 2005 that number was only 18.7 million. Planners also had to account for the growing population of Macao. The city is one of the most densely populated places on earth, reaching 21,400 people per square kilometre last year, up from 21,000 a year earlier. Vehicle density is growing, too. It was 586 vehicles per kilometre in 2016, up from 583 a year earlier.

This has led to resident complaints of overcrowding, especially downtown and in areas favoured by visitors; restaurants are full and residents have to queue at their favourite shops. Despite these inconveniences, Wong believes that the people of Macao people have come to accept that their city is a major tourist destination. “They are adapting,” Wong says.

The new terminal has facilities and services not available at the Outer Harbour. To streamline the process, the new terminal offers substantially more immigration and customs counters, equipment to handle large amounts of luggage, carousels and trolleys for passengers carrying luggage, and four electric vehicles to carry those in need. These vehicles, driven by members of staff, are especially helpful for elderly and disabled passengers.

Three ferry companies operate at the Taipa terminal: TurboJET, Cotai Water Jet, and Yuet Tung Shipping. They serve Shenzhen as well as Hong Kong; a third route to Nansha, in Guangzhou, is under consideration. Cities on the west side of the Pearl River, like Zhongshan and Jiangmen, are unlikely to be served from Taipa. They will continue to rely on buses that run frequently on an expressway from Zhuhai.

To prevent overcrowding at the new terminal, Wong says her staff liaise closely with the operators to ensure that there is sufficient immigration and customs staff to handle the inflow and outflow of passengers. Her department will also designate a commercial company, through a public tender, to provide retail services for passengers and staff. These will include Chinese, western, and fast food restaurants, as well as shops selling tourist goods and other retail outlets.

The berths designed to handle large ships make the new terminal a centre for tourism on the seas around Macao. In December 2015, the Central Government extended the territorial waters of the SAR eastward and southward by 85 square kilometres.

Construction of the new terminal began in 2005, with a budget of MOP580 million, with completion due for 2007. A decade later, the final cost is MOP3.8 billion 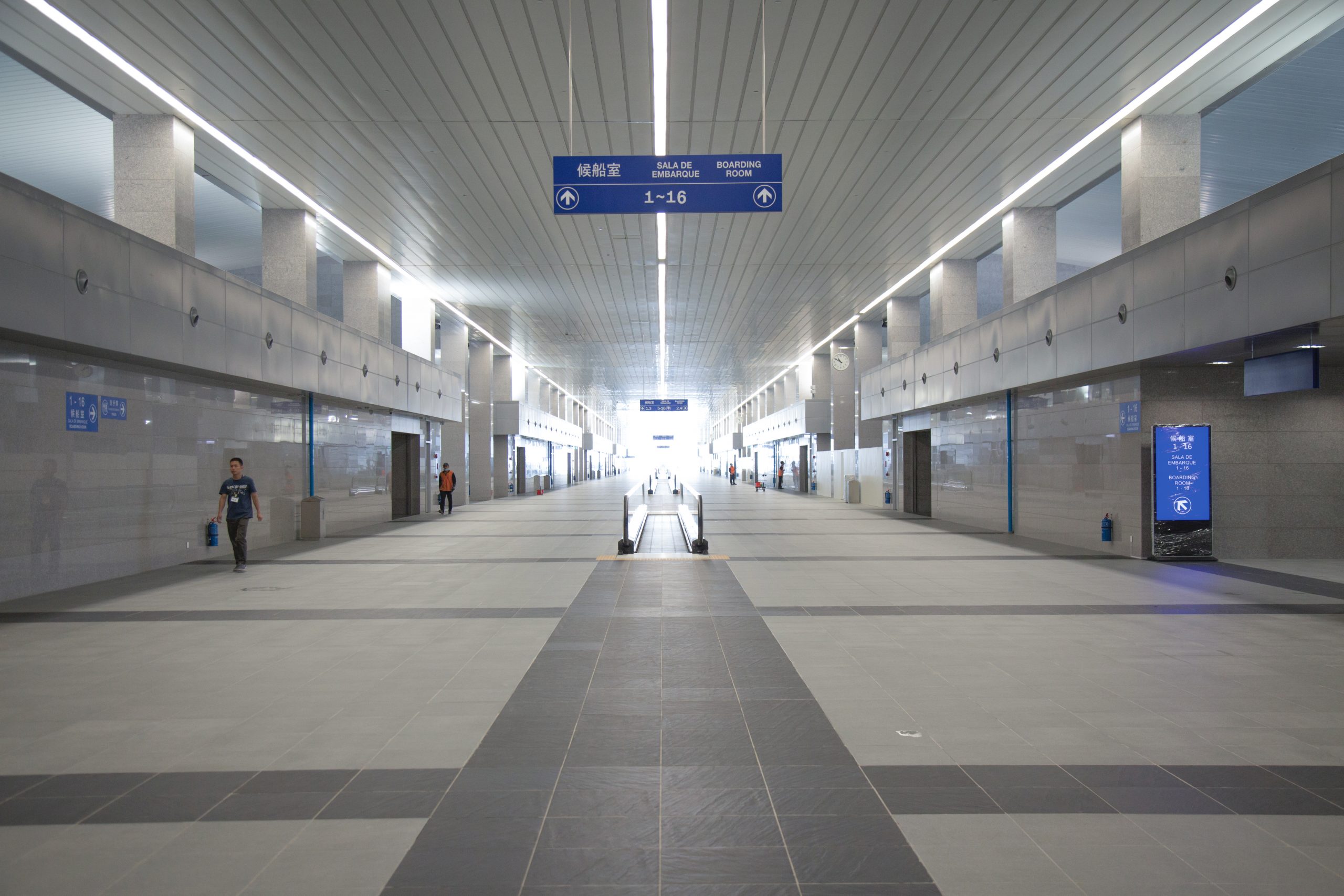 One uncertainty hanging over the new terminal is the new bridge over the Pearl River that will link Zhuhai and Macao with Hong Kong. It is due to go into operation at the end of 2017 and will reduce the driving time from Hong Kong to Macao to about 30 minutes. The 50‑kilometres bridge consists of a series of bridges and undersea tunnels crossing the Lingding channel. It will connect Hong Kong, Macao and Zhuhai, three major cities on the east and west banks of the Pearl River Delta.

Wong dismisses the bridge as serious competition, saying that the shipping companies have been preparing for this. “Ten years ago, they were very concerned about the bridge. Since then, they have diversified their routes, to Shenzhen and other cities in the Pearl River. They’re using different types of ships, and have cut their costs. The future is hard to predict, but we believe there’s room for both options.”

That said, the ferries have several things in their favour. The two terminals in Hong Kong are in the middle of the city centre, at Sheung Wan and Tsim Sha Tsui. The Taipa terminal is far more accessible, just a short distance from major resort hotels in Cotai and over a bridge to peninsula Macao. There are no traffic jams with ferries, and the 60-minute journey offers passengers the option to sleep, read newspapers, chat to their partners, finalise their betting strategy or watch films and television shows on their iPads.

Going through immigration and customs at the ferry terminal is easier now. To access the bridge, vehicles will have to go through the crowded district of Kowloon, drive to Lantau Island and onto an expressway to Hong Kong airport. On arrival at the large man‑made island outside Macao, passengers will have to disembark to go through immigration and customs. If their vehicle has a permit to drive in Macao, then they will be able to continue their journey in it. If not, they will have to use another vehicle with the required permit. The whole process promises to be substantially longer than at the Taipa pier, which is expected to take a matter of minutes.

That leads to the larger issue of vehicles. The governments of the three jurisdictions have yet to agree on which vehicles will be able to use the bridge at both ends. The congested streets of Hong Kong and Macao mean neither of the two governments is willing to give many permits to vehicles from outside. As it stands, most people will have to leave their vehicle at the large parking lots being built at the entrances of the three cities and, after going through immigration and customs, use another transportation method for their onward journey.

All of this is good news for the new Taipa Ferry Terminal which promises a quick, hassle‑free experience. With Macao growing and the tourism industry booming, the staff at Taipa can look forward to busier days ahead.

Green innovations at the forefront A regional economic transformation