The first batch of Macao residents who were staying in Hubei province since the COVID-19 outbreak has arrived home after weeks of preparation by the Macao government and with the support of the Hubei provincial authorities and the central government.

It technically only took about an hour-and-a-half for an Air Macau charter flight to bring home 57 Macao residents from Hubei province on 7 March – but the preparation, planning and co-ordination behind this mission took many weeks. The outbreak of the novel coronavirus disease and the subsequent travel restrictions in place across the central Chinese province meant that getting these residents home took plenty of work from multiple authorities.

Following the lockdown in Wuhan, the capital of Hubei, on 23 January that expanded to other cities in the province within days to contain the virus outbreak, more than 100 Macao residents were stranded in the province, the hard-hit region that accounts for over 80 per cent of confirmed cases in Mainland China. According to news reports from the local media, some Macao residents were visiting relatives before the travel restrictions were in place in Hubei, while others were living with their family members in the province.

Since the start of the outbreak, Chief Executive Ho Iat Seng has instructed the relevant government departments to give all types of support to the Macao residents in Hubei and formulate a plan to bring them back home, Secretary for Social Affairs and Culture Ao Ieong U remarked in a press conference on 7 March, noting the ‘smooth conclusion’ of the charter flight. The Tourism Crisis Management Office kept in regular contact with those residents, while the Macao community also gathered and sent any necessary goods and medical supplies for them amid this public health emergency.

This charter flight had ‘enormous support’ from the central government, as well as the Chinese liaison office in Macao and the relevant public bodies in Hubei province, paving the way for the Macao residents scattered across different places in Hubei to arrive in Wuhan for boarding in a short time period, Ao highlighted. The 57 returnees from 31 families, aged between three months old and 77, had stayed in various cities in Hubei – including Wuhan, Xiaogan, Xiaocheng, Huanggang, Xianning, Suizhou, Xiangyang, Enshi, Yichang, Huangshi and Shiyan – some of which are several hours of drive away from the Hubei capital.

Not enhancing the risks of cross-infection for the returnees during their trip home was the major consideration behind this mission. This included the excursion from their residences in Hubei to the airport in Wuhan and the flight to Macao, explained Lei Chin Ion, the director of the Health Bureau (SSM), during a press conference on 25 February. The administration also had to consider the wellbeing of crew members and government workers on the flight, as well as the handling capacity of the local medical system, he added. “We are working on a wide range of possible plans but it could only be implemented under the right circumstances,” Lei added at the time.

This flight had enormous support from the central government.

As the virus spread across the Mainland has started to slow since mid-February, it was proven to be the right timing on 7 March. The Macao government assigned a 15-strong team to help the first batch of Macao residents in Hubei back home – mostly those living in Wuhan or in close proximity to the city. The working team comprised seven crew members from Air Macau, as well as doctors, nurses and officials from SSM and MGTO.

The charter jet arrived at the airport in Wuhan around 11am on 7 March. Received and assisted by officials from the Hubei provincial authorities, the Macao team carried out health checks on the returnees at the airport, ensuring they had no symptoms of fever or respiratory infections and had not been in close contact with any COVID-19 patients. This was followed by another round of security and temperature checks by local customs. Carrying 57 returnees and 15 working team members, the charter flight departed from Wuhan around 5pm on the same day and landed in Macao about an hour-and-a-half later. 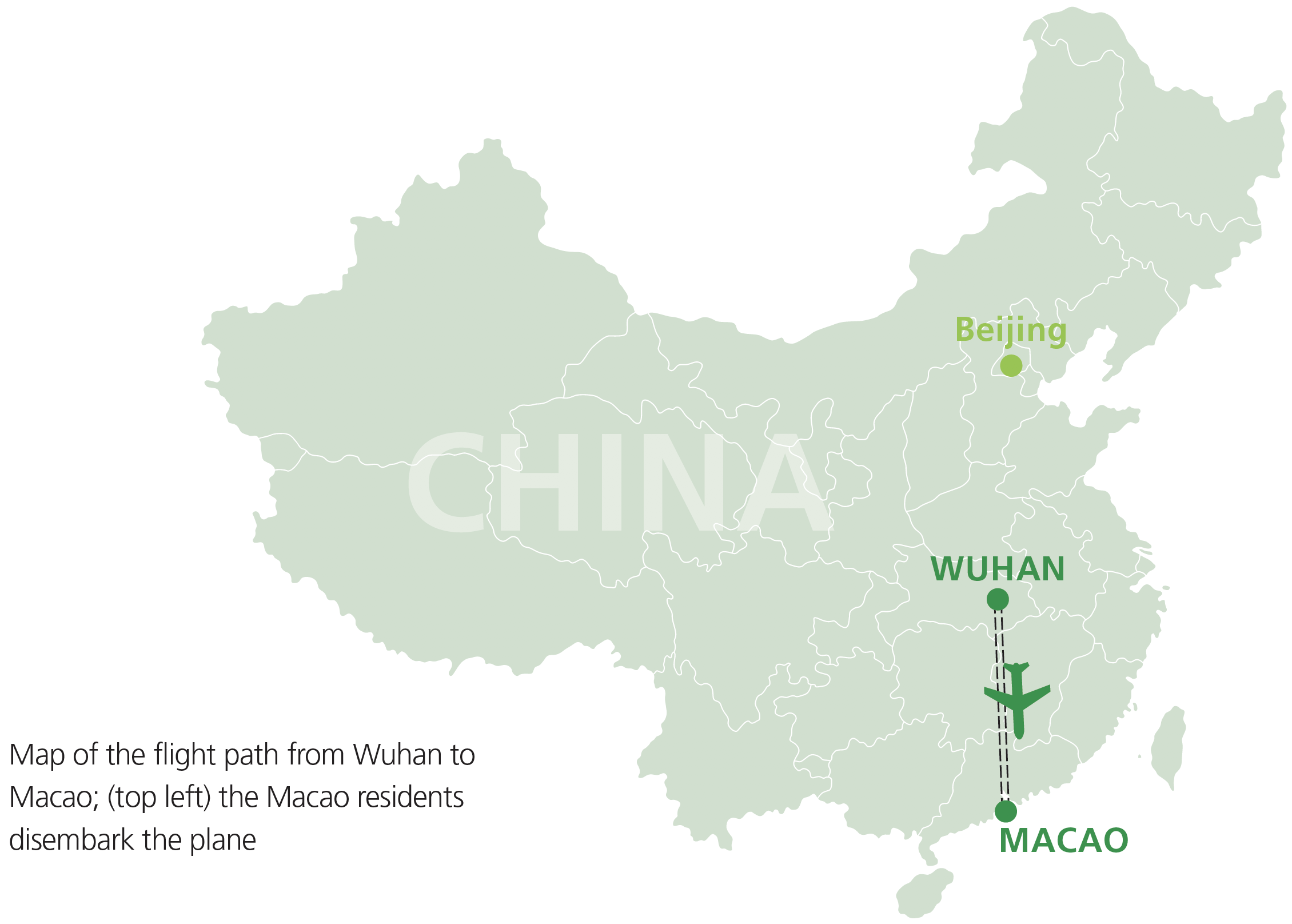 The returnees were taken to the public health centre in Coloane where they completed their 14-day quarantine before undergoing further medical surveillance at their homes for another two weeks. The crew members of the charter jet and the MGTO officials also underwent quarantine for two weeks in a hotel. The exception was the six doctors and nurses from SSM, given their long-term medical training and full protective gear. According to both SSM and MGTO, there were seven chronic patients among the 57 residents arriving home from Hubei but all have remained in healthy conditions with negative results after three rounds of COVID-19 testings. For the remaining Macao residents in Hubei, the Macao government has not confirmed when there will be a second charter flight. Figures from MGTO show there are now more than 100 Macao residents and their family relatives in the central Chinese province.

Inês Chan Lou, who heads the Licensing and Inspection Department of MGTO, commented in a press conference on 12 March that the authorities have to mull over a basket of factors before a second charter flight can be confirmed. These factors include the health conditions of the first batch of returnees, the magnitude of the virus spread in Wuhan and nearby cities and the carrying capacity of the quarantine facilities in Macao.

Nonetheless, those who remain in the Chinese province have been left in the good hands of the local authorities and the central government, making no difference to their experience since the virus outbreak weeks ago. “[These Macao residents in Hubei] are staying in their motherland,” Chan told the press in February about their living conditions. “Our country has taken great care of them.”

The power of technology A matter of masks