A Window (Lei) to creativity

Imagine a village where doors are left unlocked, where all the neighbours know one another and personal conversations replace digital communication.

The simplicity of life in a small village is Window Lei’s inspiration for the Village Mall, a space entirely devoted to Macao’s creative talent. Lei’s inspiration for this project also comes from a simpler Macao of the 1980s and 1990s, when he was a young adult. Back then, the city was a very different place from the booming metropolis it has become today. “At that time, Macao was smaller and everyone knew each other. Even today that happens. No matter how much Macao grows, it’s basically still a village,” he says.

Riding around on a child‑sized bicycle in the Broadway Centre Building as though he were zipping through the narrow streets of Coloane Village, Lei greets people in the corridors, shops, workshops and studios that have breathed new life into this three‑storey building on Rua do Campo.

The Village Mall will officially open it’s doors at the beginning of 2017, but to truly understand and appreciate the significance and beauty of the space requires a trip back in time to visit some of Lei’s other creative village projects.

The year is 2000, and the inherent claustrophobia brought on by living in a territory as small as Macao has been affecting Lei. “A time came when I needed to get out and see the world. So with a hundred pounds, a one‑way ticket and a guitar on my back, I went to England and Ireland,” he recounts. The son of an architect and a housewife, he didn’t have much money and knew very little English, but because he was born in Macao and had a Portuguese passport, it was easy to enter England, a destination that appealed to him.

“Chinglish helped me get by,” he recalls with a chuckle. Working as a waiter, Lei learned that someone who knew how to “play a few things” and had recorded albums in Macao as he had was still considered a low‑level musician in England. He spent two years travelling and experiencing life outside of Macao until he felt it was time to return.

Lei was ready to embark on his plan of dedicating the next 10 years to social work which he had studied at Macao Polytechnic Institute before going to Europe. “The truth is that when we’re in Macao, we want to leave. But Macao is home, and after being out there we always want to come back.” Plus, there was a lot to do at home.

From ‘ugly duckling’ to ‘village chief’

Over the span of a decade, Lei worked in four different institutions helping drug addicts kick their addictions, establish rehabilitation plans which eventually led to his patients building families. He also supported students with academic problems in continuing their education and assisted people with disabilities. “Sometimes I looked like a policeman. I’d arrive at the dumping grounds where groups gathered to do drugs, shout for them to come over with the authority of a policeman, and then change my tone of voice and speak to them calmly like a friend.”

That was how Lei gained the trust of his clients and patients. Later, when he would lead group walks in the hills of Coloane, he often would find more people joining behind him.

Of short stature and wide girth, Lei does not possess the physical attributes one might immediately associate with a leader, but nevertheless he accumulated a number of followers. “The guys followed me, shirtless and tattooed, when we’d go on walks. We looked like a gang, and that’s when they began to call me Village Chief.”

Once the ugly duckling, Lei’s transformation into the village chief was an example to follow. He was not the only one who was surprised: “Lots of people looked at me and thought that if he can do that being short, overweight and broke, why can’t I?” And so the well‑warranted nickname stuck.

In 2009 there weren’t many places for artists in Macao. I told young people that choice was important, and they didn’t have that in Macao

Opening a Window (Lei) to creativity

Ten years went by and Lei faced a new decade: this time, he wanted to dedicate himself to promoting creativity in Macao. “It was 2009 and there weren’t many places for artists in Macao. I told young people that choice was important, and they didn’t have that in Macao.”

The opening of Lei’s first ‘cultural village’ in an industrial lot was truly innovative. It was like a window opening for the city’s creativity. “I think I had some influence on the movement that arose later in the creative industries, but I won’t take all the credit.”

The first village that Lei opened, everyone who helped with the project had been helped themselves by the Village Chief. “Even today I try to integrate. For example: people who don’t like to study can work in the villages. These places are made up of people with stories different from mine; I’ve learned from them.”

Now, seven years after the inauguration of the first ‘cultural village,’ and with a new one opening every two years for a running total of four, Lei is once again thinking ahead. “Today, everyone is set up in industrial buildings. To be different, I decided to convert a shopping centre into an art centre. Otherwise I’d blend in with the competition. So I opened Village Mall.”

This summer, Village Mall was open for an experimental period, but its official opening is in December. It comprises 500 square metres divided into 90 shops with space for exhibitions, musical performances, fashion shows, film screenings, a dance studio and a small market area selling new and used products. The space also boasts a number of small restaurants, cafés and traditional Macao sweets as well as book‑exchange stands and workshops featuring various media of artistic expression.

Ultimately, Lei determines the criteria for choosing businesses occupying this new centre on Rua do Campo in the heart of the Macao. “Just like a village, everything is done based on face‑to‑face contact. People who want to open a business come speak to me; when I want to engage with others, I go talk to them.”

Lei guarantees that the project supports local artists both in production and promotion of different products.

Lei may have moved on from social work to cultural work, but he never forgets the importance of social causes: Village Mall has a breastfeeding room and is one of the few public spaces in Macao offering this service.

The great challenge of village life 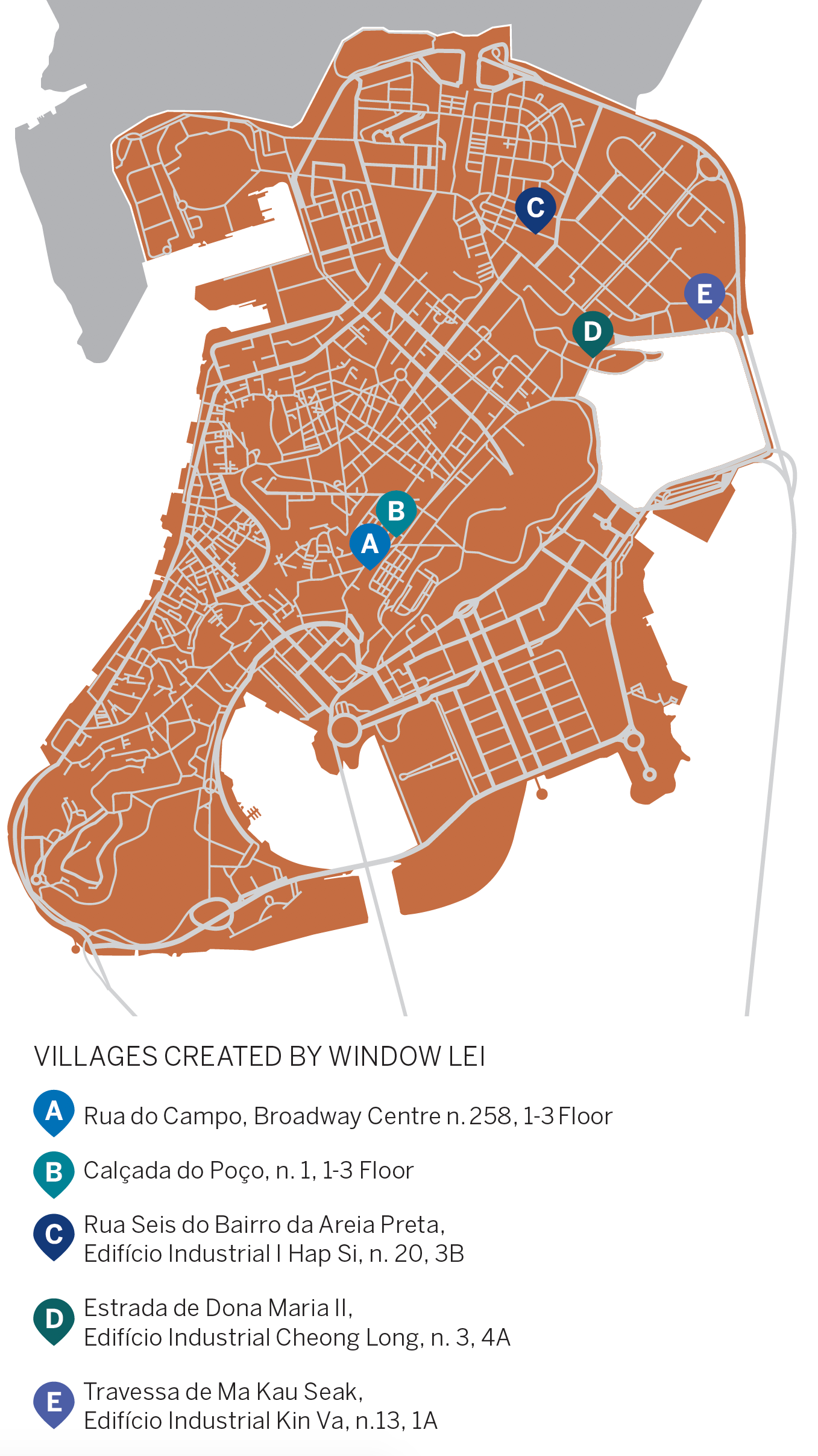 Lei acknowledges that the major challenge of being an artist or working in art is making projects profitable. “How do you make money?” is a commonly asked question.

Before the Village Mall project, Lei had not received any public financial support. Enthused by a recent visit from Vice‑President of the Cultural Institute Chan Peng Fai, Lei believes that more government assistance may be on the way. “I’ve always done this because I wanted to. I did everything without any support. I’d roll up my sleeves and try to keep things balanced. When something is profitable, I try to compensate for something else that’s less profitable. That’s how I’ve been doing things,” explains the creative director.

Keeping the project alive and flourishing poses yet another challenge. Until now, all the spaces Lei created and supervised were promoted via word‑of‑mouth and social networks, especially Facebook. But there are no perfect formulas, just willingness and intuition. Because the Village Mall project is more ambitious, Lei realises he must delegate tasks for it to be successful.

Before, the business model was centred around him, but he cannot be the sole person responsible for managing three floors. “I like the freedom I have to manage my projects, though I know I have to delegate. I think that the job of a person who works in an office must be harder than mine: the amount of commitment to having a day that’s always the same is much more than my freedom.”

Lei’s ten-year plan, looking after those in need

In three years, Lei will reach the end of yet another 10‑year cycle by which he has divided his life, and he will have to decide what to do next. “Sometimes you have to stop and think about what you want. However, if I want to keep doing what I’m doing now, I’ll do it regardless of the support I have.”

In the near future, he plans to combine the best of his two worlds: bringing groups of social workers together to promote culture among the needy. “The job of a social assistant is usually more focused on charity work, and here they’ll have an opportunity to promote cultural activities. What’s most important is for young people not to focus on drugs, for example, but rather on more enjoyable things.”

When he looks at the Village Mall and what he has built driven by sheer, inexhaustible willpower, Window Lei has a smile on his lips and a positive outlook regarding the project’s contribution to culture and creativity in Macao.